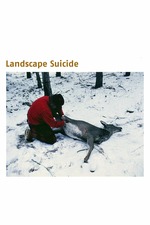 All filmmakers play within the never-ending realms of space and time, whether they are aware of it or not. Doesn't matter who you are, what you are shooting on, or anything else. Space and time make up everything around us. But when a director is aware of this while making a film and make space and time more than just concepts or ideas, magic happens and this is what James Benning does with Landscape Suicide.

Does the world revolve around us and our actions or does our actions revolve around the world? Landscape Suicide brings up this question in many different abstract and interesting ways, almost from the very first scene. Benning's unbiased and undismayed look at two different murders that have taken place in the land of Americana allows the viewer to decide for themselves on whether these two are guilty or not. In fact, Benning is so careful and democratic towards these stories, that both of them almost get the same exact time spent on them and the structure of which the stories are told are nearly identical. Emotions have been compromised and repressed for the sake of impartial filmmaking.

Orinda, California and Plainfield, Wisconsin are the two primary landscapes featured in Landscape Suicide. Polar opposites. California is an industrialized and modernized, populated by man and machine. 2nd most friendliest town in America, eh? Wisconsin is a land that hasn't given up on nature. The wildlife roam free and the silence is as peaceful as it gets. Tradition is number 1. Benning makes these two conflicting landscapes even more so, by the pointing out of the different architecture and music, but ever so subtly with only the camera to do this. There are many parallels to be found within Landscape Suicide and the the landscapes themselves are just the beginning.

Landscape Suicide is easily one of the most haunting and chilling films I've ever seen. The abounding sense of elegiac surrealism is tucked tightly behind every frame in the film. If this was done on purpose by Benning is something I don't know, but it surely works if he did it intentionally. Two great examples of this would be the static shot of a plain house during the Orinda half of the film, a house surrounded everywhere by nature, with PYT playing in the background and a sequence of handwritten letters about the murder from Burdanette to her parents, with a commercial for a greatest hits album playing along aside it.

Benning takes the conventional structure and molds it specifically for these two different stories, filling the audience in on the details of the victims and suspects through many different avenues and channels. Print, voice-over, computer text, pictures, and such. It's so fascinatingly innovative and inventive, that it makes the film much more exciting to watch unfold.