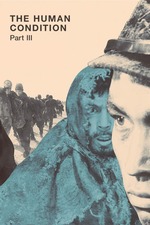 150th film this year. Here's to another 150 before December 31st. An unexpected journey is the best way to describe my experience with The Human Condition trilogy and a very depressing one at that. I thought I would never get around to watching these set of films, but I finally did and I'm incredibly glad about it. A set of films that are no doubt incredibly dark, realistic, bleak, and very heartbreaking to watch. A difficult watch due to the running times, i'm not going to lie, but it's worth every single second.

The Human Condition I: No Greater Love was about emotion, specifically empathy and sympathy, and how it can change one's perspective on war, cruel acts, and life in general during critical events that affect everyone involved. Standing up for what is right in extremely dark times. Being a beacon of hope to those who have none. The Human Condition II: Road To Eternity was about war and how it changes people for either better or worse. How it can make a man stronger or go completely insane.

The Human Condition III: A Soldier's Prayer is about survival, specifically in the first hour and the third and last hour of the film. Especially in the first hour. The second hour in A Soldier's Prayer is about the political side of the war, which I was waiting for director Masaki Kobayashi to explore. I would have liked to have seen some espionage-like elements thrown in, but that's just me. Watching Kaji and his two army mates by his side trying to stay alive in a dead world where it seems there is nothing left was nothing short of heart wrenching.

Masaki Kobayashi's The Human Condition Trilogy is one of the best trilogies in film history, with every film doing something a little different from the other. I would like to think of these films as one big entity, but if I had to rank them, it would go something like No Greater Love > A Soldier's Prayer > Road To Eternity. But they are all incredibly moving and emotional and an essential to anyone interested in cinema as an artform and not just entertainment.