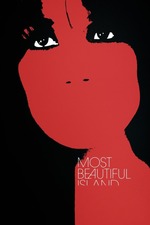 following the total disbelief i felt after watching this, i rushed to find any interviews with ana asensio speaking about her influence. before i pressed play on one of two videos, i realized this film started with "this is based on true events."

watching asensio be so fearlessly candid and eloquent in explaining how her horrible experience translated to this film is nearly as heartstopping as the film itself. she talks about the girls she encountered, girls like her who were unlucky and struggling against all odds. she talks about how she could only imagine dramatizing it and turning it into something that people could watch and learn from.

my mind is totally blown. "most beautiful island" takes place within one day of an immigrant's life. though we don't know too much about her, by the end, when it seems like she's gotten herself into a huge mistake, we are rooting for her at all costs. asensio spoke about how she also wrote/directed/produced this to give herself, a struggling actor, a decent role. and she didn't disappoint. she has a transfixing, moving presence. her strength is absorbing and compassionate. this is truly one of the best performances i've seen from 2017.

that being said, this film is available on itunes and kanopystreaming (and probably tons of other sources!) i so urge you to dig into this thriller. asensio has a new fan in me.

Sartre - The Road to Freedom