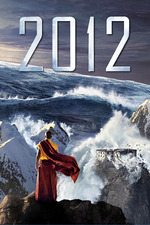 I find it interesting that 2012, in between the schmaltz and the terrible screenplay, is entirely about environmental collapse. Continent splitting earthquakes, continent swallowing tsunamis. Long dormant super volcanoes waking up to spew death on a fragmented modern world. A divine flood not seen since Genesis (or the Epic of Gilgamesh, or any other deluge myth) crashing against the Himalayas. A sort of colossal baptism. The old world dying so the new might live.

There are always incredibly interesting, not to mention timely, themes to be mined from these sorts of environmental apocalypses. Especially in the Anthropocene epoch, these contemporary mythic deluges can be seen as an exaggerated representation of climate change – the natural wreaking havoc on the human in a world-ending act of retribution. In the realm of cinema, the first film that comes to mind as really delving into these ideas of a catastrophic flood and the subsequent birth of a new world is Ponyo. Obviously, as a Miyazaki movie, it actually has intelligent things to say about the relationship between humanity and nature, and how we might find ways to coexist in an uncertain future. But this isn’t a review of Ponyo, plus I’m pretty sure it’s sacrilege to compare that movie to something as comically bad as this one – so I’ll try and be brief. Basically, Ponyo is intriguing to compare with 2012 in a few ways, but I’m most interested in their varying acknowledgements of human responsibility for the disastrous events that occur. While Ponyo’s drowned world, though not explicitly caused by it, is very much linked to human pollution (e.g. multiple scenes showing miscellaneous filth in the harbour of the seaside town, and I think Ponyo’s father calls humans ‘disgusting’ like ten times, etc.), 2012 does not mention climate change, or even suggest that humans are bad for the environment and may have caused this, at all.

You might say that 2012 doesn’t need to name check climate change, since the narrative cites ‘neutrinos’ from the sun as the cause for cooking the planet. (Side note: I think I lost braincells typing that sentence!) And yeah, it technically doesn’t need to. But, though it’s apocalypse is hilariously over-the-top, and absurdly scientifically inaccurate, it is still very much rooted in natural forces. Which makes it fascinating (and a little frustrating) exactly how little the movie cares about the environment, or even mentions it at all. In this story of environmental catastrophe, earthquakes and tsunamis and other great big explosive stuff, human culpability in our own demise is not acknowledged in the slightest. Instead of something well-meaning but dumb – like a comparable disaster flick from around the same time, The Day After Tomorrow - we’ve got a heavy-handed Noah’s Arc story that not only doesn’t understand that part of the Bible, but also has never even glanced at a geology Wikipedia page.

Basically: why talk about the poisonous emissions and apocalyptic consequences of post-Industrial Revolution human influence on nature when we can just blame it all on the end of the Mayan calendar and some pesky solar flares!

Anyway. No one wants me to write an essay on 2012, of all things, so I’ll shut up and get into the actual quality of the movie!

It’s big, stupid, and sappy as all hell. And I’ve never had anything other than a blast watching it!