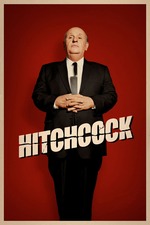 I, like no doubt many others, initially baulked at the mere notion. You know what I'm talking about. Sir Anthony Hopkins? As Hitchcock? Really? Hmm, but Hitchcock...? Cue some honest but nonetheless optimistic head-scratching.

From an admittedly unlikely source, Sacha Gervasi, screenplay writer of some note for The Terminal and director of Anvil: The Story of Anvil, comes a frankly more domestic approach to the partial-biography of one of cinema's greatest ever directors. Concerning itself mostly with the headlong sprint of a stellar career and the production of Psycho, as 'Hitch' looks for something to do after the incredible success of North By Northwest. Gervasi takes Stephen Rebello's book, hands it quite gently to screenwriter John McLaughlin and bingo, you have a project that at first glance seems very appealing indeed.

Starring the aformentioned Hopkins and none other than acting royalty Dame Helen Mirren, as long suffering but ever patient wife Alma Reville, this is maybe not what you will be expecting. On their own, these two are if not bankable then certainly as watchable as you can expect to get, but throw in this particular subject matter and a sophisticated script, handsomely delivered, and this quickly begins to turn into a curious little gem.

With James D'Arcy, Jessica Biel and Scarlett Johansson, we also have some very able support as Anthony Perkins, Vera Miles and Janet Leigh respectively. As Hitchock, overweight, overtired and with a roving and sometimes voyeuristic eye for the ladies that aren't his wife, Hopkins takes a little while to get used to, but by the time you're twenty minutes in and some effective time spent in the make-up department, it's quite easy to forget that its actually Hannibal Lecter under all the prosthetics.

As if proof were needed that even the most celebrated and outstanding creative talents don't have it all their own way, the story tracks the problems encountered with Paramount when trying to get Psycho greenlit, the decision to self-finance this passion project and all of the inherent problems that arise from this. In this respect, assuming its authenticity, it is a valuable potted history into the process behind just how things got done, back in the day. Add Alma's dalliance with Danny Huston's Whitfield Cooke, who comes across as the man that so very nearly was, and you have a number of interconnecting storylines that require your attention.

Altogether, an enjoyable film that maybe lacks a little bit of soul. In portions, the marriage of Alfred and Alma does appear strained, but maybe not quite as much as it should. Hitchcock's dictatorial directorship is mentioned, but never really thoroughly examined and the hints at his perceived lechery are fleeting and unconvincing. The acting performances are sound, but never astounding and whilst Hopkins' Hitch is impressive, it is not jaw-dropping. For devotees of the man, this is probably a little lightweight, but for the more casual observer of the Hitchcock and his work, it is enough of a biopic to entertain and inform.