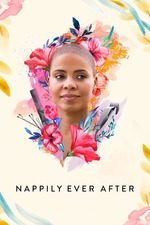 Violet Jones (Sanaa Lathan) is a perfectionist who seems to have it all. A high powered career as a marketing director, a gorgeous house and a successful, handsome boyfriend who she is sure is set to propose. It's clear from the very beginning of the movie that Violet has been set on this path by her mother, Pauletta (Lynn Whitfield), whose strict beauty standards meant Violet rarely got to let her hair down, so to speak, even as a child.

Violet doesn't seem to realize just how her mother's demands for perfection has affected her as an adult until her longtime boyfriend Clint (Ricky Whittle) buys her a dog instead of a ring, and the ensuing argument leads Clint to explain to Violet that he doesn't know who she really is, even after two years of dating. She's far too concerned about her image to let her guard down for anyone to truly get to know her. This (along with a horrible day at the salon and far too much alcohol) leads Violet to shave her head in a moment of drunken empowerment. Needless to say, she soon owns her new look and begins to discover who she truly is without the weight of her own vanity holding her down.

In the process, she begins a relationship with a hairdresser, Will (Lyriq Bent) and becomes close with his daughter, Zoe (Daria Johns) who is also trying to learn to love herself as she is. Unfortunately while Violet is learning growth, her mother is not, and she remains judgmental of Violet's new life choices, as well as dating a hairdresser with a child. It stifles Violet from fully embracing who she could be. When Clint re-enters the picture, you can sense she's conflicted over whether or not she wants to return to the life she had planned for herself before the non-proposal and botched hair mishap. When Clint asks if she'll regrow her hair, all Violet can say is she doesn't know, while lamenting the money and time wasted on taking care of her hair, striving for perfection.

While there is romance to be had in Nappily Ever After, the true message of the film isn't to find love elsewhere, but to love oneself, to be who you truly want to be rather than who everyone else expects you to be. Sanaa Lathan is wonderful in this film. Watching the character growth of Violet from beginning to end is quite the experience. She is rather unlikable in the beginning, spurned on by her success, vain and entitled. There is no sympathy when her boyfriend explains that he can't marry her when he doesn't even really know her, because it's quite clear that Violet isn't looking for a partner, she's looking for the perfect husband to match her perfect hair, and perfect job and perfect home.

But then her hair goes from bad to worse, and as soon as Violet picks up those hair clippers, it's clear things are about to change for the better. This scene is done so beautifully that I could feel every single emotion Violet goes through when she is shaving her head. Despair, frustration, happiness, and shock. The scene takes its time, allowing us to process the symbolism of what Violet is shedding just as she is, even in her drunken state. And of course, the 'harsh light of day' moment in the morning when she sees herself in the mirror for the first time, hungover and mostly bald. Lathan carries these scenes brilliantly, and suddenly Violet is three dimensional, allowing her vulnerability to shine as she begins to realize that image isn't what makes a woman a woman.

Nappily Ever After is definitely worth a watch. I can't say enough things about how wonderful Sanaa Lathan was, but you also get the bonus of a gorgeous Lyriq Bent and Ricky Whittle romancing her. That being said, the romance does not overwhelm the true meaning of the movie, which is self-empowerment, and in my opinion, the ending is as satisfying as any other great rom-com.

Sleeping with Other People