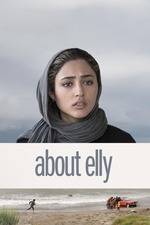 This 2009 production, finally arriving on U.S. screens, is immediately my favorite film of 2015 so far. Don't miss the chance to see it in a theater, where there will be no possibility of a "pause" button, the telephone, or anything else interrupting the slow intensification of Farhadi's pressure cooker.

I don't know which is more amazing — the revelation that Farhadi is becoming, next to the Dardenne brothers, our most consistently dependable source of A+ cinema... or the fact that he somehow found, in the actor who plays Ahmad, the Iranian twin of Mark Duplass.

I can think of no more compelling evidence that we need more films about domestic life in Iran than the fact that, a few minutes into the movie, when Elly seems momentarily anxious, my friend who watched the movie with me began suspecting that she was a suicide-bombing recruit. And how can I blame him? That's how narrowly American media has defined possibilities about Iranian characters for us.

I owe it to those who have sought to distribute Iranian cinema in the U.S. that such a possibility for that character never even crossed my mind.