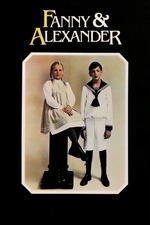 How strange I find it to watch this film for the first time now, after watching Babette's Feast so many times I've lost count. This film, like that one, has a climactic speech at a celebratory dinner, a speech made by the same actor — Jarl Kulle — once again playing a worldly man who arrives at a fleeting glimpse of insight... perhaps even as he's speaking.

Anyway, his Babette's Feast speech is profoundly moving. This one is long-winded and frustrating. No contest.

So, I've checked one of the Big Empty Boxes on my Cinephile Checklist: Fanny and Alexander. I watched the theatrical version, not the long television series version... and I think I'm content to keep it that way.

This film is admirable in its ambitions and as an expression of lifelong struggle. I can see why Ebert sings its praises — it taps directly into his own conflicted relationship and personal history with Christianity. You can feel Bergman's longing for true religion, and you can empathize with his abhorrence for abuses carried out in the name of religion. You can feel his deep belief in something Greater in the cosmos, his apprehension of mystery and magic and beauty, just as you can see how the damages he's suffered (however similar or dissimilar they might be to those suffered by Alexander here) give him an unshakeable aversion to the Church (or at least churchmen).

Seeing it in 2018, I can't stop thinking about Wes Anderson, and how this film provides a sort of aesthetic template for his own films: huge cast, big houses, intertwining storylines, misogynistic patriarchs who end up being bittersweetly endearing, and many shots that feel like grand stage productions instead of cinema. (But thank goodness Anderson's stories have a different sensibility altogether!)

Having said this, I find certain characters and subplots getting too much attention here — Gustav Adolf Ekdahl and his womanizing, for instance, get so much screentime, and the film takes his promiscuity too lightly for me. The titular children don't get nearly enough time, by contrast — and Fanny, as a character, barely registers. The Bishop seems too cartoonishly one-note as a villain, too simply an "Evil Churchman" caricature, to encourage a nuanced engagement with questions about faith and doubt.

Here's another complaint: It's minor, but it concerns a moment that really drop-kicked me out of any suspension of disbelief, and I never recovered. There is a strange rescue-mission sequence late in the film that seems to think it is very funny. It isn't. It also doesn't make any sense; you'd have to be an idiot to attempt that particular rescue plan — and I'm baffled by the fact that the movie wants us to believe it worked.

I've long been a Bergman admirer — I think Persona and Winter Light are my current favorites — but never an enthusiast. This film doesn't change that. I respect it, but I can't say I particularly enjoyed it.