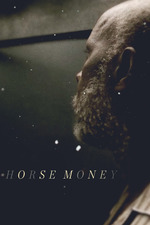 "Pavement spirals down ahead like the fossil of a giant shell
Along the kingdom's midnight marches
I wear my shadows where they're harder to see
But they follow me everywhere
I guess that should tell me that I'm traveling toward light..."
- Bruce Cockburn

This mesmerizing tour of a very particular purgatory is like Costa's take on a Wenders idea. There's something reminiscent of Wings of Desire in the way these troubled ghosts drift across the canvas of historical calamity — through crumbling buildings, war-haunted forests, hospitals fraught with echoes of suffering. And there's something faintly reminiscent of Paris, Texas in Ventura's painful ghost-world encounter with a war widow, in the way he seeks to console her about her lost husband.

I wouldn't claim to understand half of what's going on here; this is my first experience with Costa, and I apparently need some lessons in Portugal's Carnation Revolution. But there is more than enough here for me to have been enthralled by this cast of characters, their surreal environments, and the breathtaking compositions — bright windows, strange mirrors, dark corners, architectural disintegration — that Costa discovers.

And a culminating scene of one ghost's grace toward another will stay with me for a long time, even if I'm somewhat unclear about their personal history.

This will be one to return to when I find time to study some of Costa's earlier work. After a season of films driven by the necessities of their plot, this dream-state reverie feels like freedom and revelation.