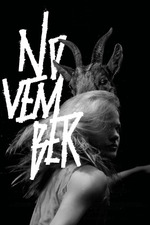 I've just seen the most visually extravagant film that I'm likely to see in 2018, and now I want to form a band called the Novemberists that performs rock operas spun from Estonian ghost stories and folk tales.

While Tarkovsky comparisons apply only to this film's exquisite surfaces, that doesn't mean the substance is lacking — it just means that this is a different kind of picture altogether. It isn't a volume of visual poetry; it's an illustrated manuscript.

I admire its story of damned lovers in a community of wretched sinners who will believe any superstition and sell their souls for any advantage, but it isn't the script — it's the spectacle that casts a spell. I wish I could say there are surprises bigger than the one in the opening scene — which I don't dare spoil for you. But it's never less than awe-inspiring in its pageant of light and shadow, its deep canyons of detail and its sudden washes of snow and darkness, its gallery of faces as textured as the bark of ancient cedars, and its startling supporting performances by characters made of garden tools and tree branches and bones — bursts of stop-animation madness that suggest a collaboration of Jim Henson and David Lynch. (That talking tree with a head made of chewing gum from Twin Peaks: The Return would fit right into these woods.)

I rented this from Vudu, and now I'm dying for a chance to see this on the big screen.