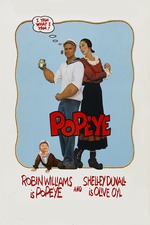 Three factors contributed to me missing this film when it first arrived. I was only ten, and moviegoing was frowned upon in my community. Even so, I remember that it was not very well received; the adults I knew commented that it was "too racy" and contained bad language. But the main factor was this: My fondness for the cartoon character had quickly faded years early on one catastrophic day when, at 5 of 6 years old, I asked my mother to buy a can of spinach (I can still see it there, in the dented cans discount bin) so I could have some "Popeye food" and get strong. She wickedly obliged, and I was traumatized when I had to eat a plate of steaming, slimy greens. (What had I expected? I don't know. I was too focused on the promised results!)

The film is a parade of one unlikelihood after another: That Robert Altman would direct a Popeye movie; that it would be a musical; that such perfect casting as Robin Williams and Shelley Duvall would take place; that such a magical baby as Wesley Ivan Hurt would play Swee'pea; that Harry Nilsson would give it such a gem of a song as "He Needs Me" (re-used brilliantly in Punch-drunk Love; that it would have such elaborate sets; that it would be the first big-screen appearances of Linda Hunt and Bill Irwin; and that it would still somehow look and feel like a Robert Altman picture... seriously, how does this movie exist?

Whatever the case, I'm glad it does. While only a few sequences make the movie better than a bizarre experiment, and some (the ranting of the Commodore, the drawn out showdown climax) go on far too long, I'm immediately fond of the film's sweetness of spirit, its elaborate physical comedy, its chaotic choreography, and its audacious imagination.

In a way, it reminds me of another film that features an unhinged Robin Williams: Terry Gilliam's The Adventures of Baron Munchausen. That film, like this one, has all kinds of things wrong with it, and comes very near a total collapse every few minutes, but it has so many flashes of genius, and such a big beating heart, that I revisit frequently. And I'm already looking forward to my next trip through Popeye.