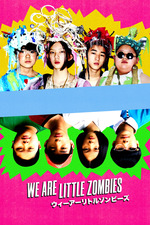 We Are Little Zombies

We are, we are little zombies!

A frenzy of 8-bit (16-bit, maybe?) video games, emotions, lack of emotions, grief, and so much more. The film exudes so much style and plays around with all the technical aspects of the film: from a black-and-white segment to audio that goes in and out and camera placements that are just fun to me (the orange juice!). I really dug it. But after about 90 minutes, it became overwhelming and seemed to lose sight of itself. That's really my only complaint, though. I'm looking forward to Nagahisa's next film.