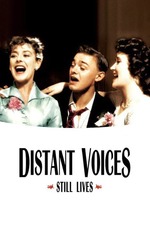 Distant Voices, Still Lives is one of those films I’ve been meaning to see for years. With its two-part structure, it’s never seemed like a film that’s easy to digest and now having seen it, that’s quite true. With its very experimental approach to storytelling, it’s a family drama put into a blender as the narrative rocks back and forth from when the children were young to the brutal father’s death in the children’s adulthood. While it risks being incoherent and lacking character development, it instead presents shards of pure brittle emotion that cut to the bone right away. It’s powerful to the point of one short vignette making me weep within seconds, but it also has the ability to make me laugh often. The shards are put in order as the character’s memory triggers transitions and happiest moments are met with relevant saddest moments from the character’s lifetimes. It’s an incredible way of filmmaking.

The visuals are drained of all colour, leaving the picture as aged brown and white which give it a nostalgic value, it’s a clear influence on low-key filmmakers such as Roy Andersson. The camerawork is especially interesting as to what it does and doesn’t show with the camera sometimes lingering in a room while the characters leave, allowing us to eavesdrop on their conversations. It gives us time to observe the rooms and seems to highlight the memories and events that took place which give them an eerie atmosphere. While the cinematography is deliberately dreary, the characters sing traditional and popular songs of the time, this music colouring their lives. It’s really beautiful and unique substitute to personalised dialogue, much of which when it’s there, feels theatrical. The strongest performance is definitely Pete Postlethwaite, who gives an astounding turn as the children’s father.

The first part, Distant Voices, focuses on the three children’s relationship with their father and the second part, Still Lives, focuses on the consequences of their father’s actions. It’s a powerful and profound statement on the relationship between men and women as some repeat history with abusive men and some try to push forward for more equality. Still Lives is more cohesive than Distant Voices, even if there are less events, but the jumping around element of the latter is sorely missed and does render it a little disjointed at first. It all comes together when it becomes apparent that the film tracks the point when one family becomes three different families and how the repercussions of childhood ripple down the generations. One of the best films I’ve seen in a long time. Unforgettable. Terrence Davies will certainly be one to look out for, and I’m sure will influence my own filmmaking too.