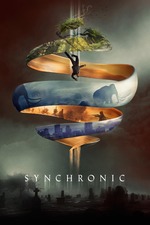 Being a fan of Moorhead and Benson's previous outing, The Endless, I had high hopes for the director duo's latest mind-bending effort, Synchronic. Running headfirst into this film with little to no knowledge of the story, I was satisfyingly whelmed by the final result.

Don't take my "whelmed" comment in a negative manner, the story and actions within are very unique and expertly crafted. The reason I use that specific word is due to my previous experiences with the duo's films. Simply, things I didn't expect happened, and things I expected didn't. To that matter, it could be said the film is a success then, considering I was surprised by the story as it unfolded.

I suppose I just expect certain elements or "entities" within the duo's efforts. On that end, it is entirely just what I would normally expect, not other viewers. And that's fine. I still thoroughly enjoyed the film and I believe other sci-fi fans will as well.

Anthony Mackie gives a career best in this film, effectively expressing a wide range of emotions with relative ease as an individual running out of time in life. The turmoil his character is going through is vivid and Mackie experty projects in the role. Jamie Dornan performs adequately along side Mackie and fairs well in his role as a troubled husband and father.

Centering around two paramedics who respond to seedy emergency calls in the Ninth Ward of New Orleans, the story quickly spirals into a series of harrowing time-bending events all centering around a substance simply known as "Synchronic." The story handles itself well, with only an odd editing choice or subplot here and there.

Synchronic attempts to be thought provoking and unique, and mostly accomplishes these tasks, if only with a couple of stumbles here and there. Sci-fi diehards should enjoy the film's twisting mystery, eerie music, riveting special effects, and thrilling acting. Casual viewers may be turned off by the film's somewhat pretentious and artsy methods, but if viewers seek a unique film, look no further.