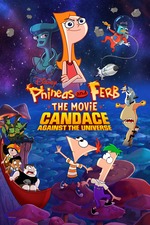 While living in a world where we’ve seemed to have lost everything, and had so much sadness, we just want everything to be over, but then Phineas and Ferb come and save us from this depressing state.

Boy did I need this right now. Completely erased the whole Boseman thing away from my mind for one of the best 1 hour and 26 minutes of my life.

Phineas and Ferb the Movie: Candace Against the Universe takes us from the Flynn-Fletcher’s backyard, to a planet far from there after Candace is abducted by Aliens, and Supposedly is the Chosen One among their people. So Phineas, Ferb, Doof, and the Gang must go on an adventure, to save their Sister, while learning the lesson that everyone has a place, and are all special.

I thought this film was perfect, I thought all the right elements were there, in all the right places, I thought the voice work was very well done, and I wasn’t finding myself bored. I was smiling throughout this entire film, and was feeling the nostalgia overload, cause like so many of you, I grew up with this show, and still am, but the show was always a fun thing for me and my family, so seeing this film, and their return was so emotional, I got so happy I cried, I’m not embarrassed by that, cause I did.

The whole film was phenomenal, the run time... boy it looks short, but it was the perfect amount of time to fit everything in.

I thought the comedy, and songs were the best part of the film, every joke landed perfectly, and all the songs were in the right place, so that was great to see. The whole drawing board scene, where the gang is traveling faster then Light, and going to Povenmire, and Swampy, I thought, was comedic genius, that entire scene was great.

All the songs were amazing, they were put in the right places, and fit with the story, I was pleased with that. The beginning song was a nice entrance to the film, Ashley Tisdale’s voice is completely beautiful.

Doof, and Isabella’s song “Adulting” was amazing, that was one of my favorites, it was funny, and great to the character’s constant picks at each other throughout the film.

“Meet Our Leader”, and “Girls Day Out” were great songs as well, enjoyed them very much.

But my favorite song without a doubt was the finale “Us Against the Universe.” That song was so perfectly well written, animated, and played out. The whole sequence was perfect, and really gave the film that final WOW moment from the overall greatness of the film.

Also the Animation is right from the show, and I loved it. It was so beautiful, and so stunning to look at, especially on the finale, and the alien planet.

Now... lets talk Oscars. I think this should be an automatic front runner for the win, I’m sorry but it should, it was just perfect. If not the win, then at least a nomination, please a nomination at least, but it should win... just saying.

The voice actors came back beautiful, and returned to there classic characters, and made me feel all the fells, and made the film so great. They all did fantastic jobs on their roles, and deserve a huge pat on the back for the masterpiece they’ve created.

Like I said, every joke landed perfectly, the comedic timing was gorgeous, and added the film a great effect, and was quite amazing.

Overall Phineas and Ferb the Movie: Candace Against the Universe was just an amazing, overwhelmingly Nostalgic, masterpiece.

If you have Disney+ this is a must watch effective IMMEDIATELY!!!! Watch it, you won’t be disappointed AT ALL!!

-also go check out my 2020 Ranked, cause this is going really, REALLY high up there-

🔙Message from the King
🔜Ghosts of War