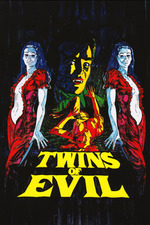 Everybody praises the earliest Hammer output - CURSE OF FRANKENSTEIN, HORROR OF DRACULA - most, due their ressurection of classic movie monsters with a new playfully colorful sheen, but I’ve always preferred the later, more pervy, lurid works. Most of that is due to the blatant desperation that permeates every pulpy choice. Stuff like TWINS OF EVIL and THE SATANIC RITES OF DRACULA come off like Roger Moore’s earlier Bond Films, where you can feel the studio just tossing shit at the wall in hopes the audience will keep coming along for these Gothic tales of vampires, devil worshippers, and the mad Puritans who may be worse than both. Peter Cushing owns his trademark gaunt sympathetic stoicism, only its in service of a tyrannical witch hunter, burning pretty girls alive at the stake. To quote Bill Hader’s Stefon, for Hammer fans “this movie has everything!” [35mm]

A Bluebird in My Heart