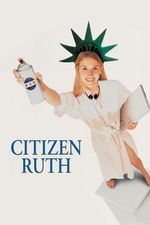 This is Laura Dern's world and we're just blessed to be living in it.

Alexander Payne's directorial debut shows exactly how much of a mess the abortion debate is, but keeps the heart of his film at the right place: it's all about how Ruth decides what she wants to do with her body. In regards to how he approaches such a topic, Payne doesn't take any prisoners - he shows you the pro-life people as they are, using their belief system as a means of claiming authority over another woman's body as well as manipulating the weak-willed.

But I feel what makes Citizen Ruth so endearing is how the whole world seems to be so against Ruth's own sense of self-control, whether or not they're trying to help her. She wants to make a single choice that she knows will be for the betterment of her future, but both sides are also trying to claim the result of her choice as their means of proving themselves right. Amidst the hysteria, she just wants to live her life as a regular human being and not as a political tool.

What a sad state of affairs.