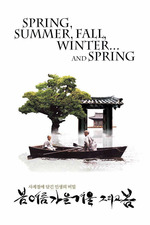 There are those times in which we know silence has a lot more to say than an actively talking picture would as Kim Ki-duk proves with this simple, yet serene portrait. In a film where it looks as if there's not so much occurring on the screen, so much emotion is placed within every frame and the wonders of Spring, Summer, Fall, Winter... and Spring become all the more clear. This is the type of serenity in cinema that is so rare nowadays, it goes to show so much can be churned out with what seems to be so little. A unique sort of film that won't be found in this manner just anywhere, it's truly remarkable.

It's evident already from the title what is to be shown to us in this film from beginning to end, the four seasons together with a repeat of the first. Yet in every season, what we also see is a circle of life with each season representing a different stage. What's also rather relative to what makes this film work is the spiritual aspect, for it paints a picture of Buddhism that only remained so fascinating from start to finish and even if you may not be religious, just the connections that can be made in the simple display of life is what remains so moving in a film like Spring, Summer, Fall, Winter... and Spring.

What took me into Spring, Summer, Fall, Winter... and Spring was the sheer tranquility of everything on the screen. It moves and flows at a rather slow pace, much like life. Spring, Summer, Fall, Winter... and Spring is one of those works of art that goes to show how art in a manner creates a reflection upon life and it was just simply the beauty of everything that took place on the screen. It was never boring, but it only remained so hypnotizing. It's a reflection upon life that only left me all the more moved in all of its simplicity.

The shots are all framed so beautifully in this lush cinematography, whether it range from how it is staged from how all of it is colored. The whole film evokes a feeling of walking through a prestigious art gallery just from its visual aesthetic and the sheer beauty of it all is out of the ordinary. It all works together to create a rather wonderful picture not to be found elsewhere, and every second of it while it lasts remains as absolutely stunning as ever, and it never loses interest from us in that field.

From a bit of research that I've done on the director, Kim Ki-duk had often worked with rather violent stories that also have been accused of misogyny (Samaritan Girl might be a good example at least from what I have seen) but seeing how well he conforms to just this simplicity is where Spring, Summer, Fall, Winter... and Spring is as intriguing as it is. Kim Ki-duk's tender direction gives the film a more serene atmosphere that just sets the whole film apart from many others.

Just imagine looking at a series of paintings in a museum and you're seeing reflections upon life and spirituality within these still images. Spring, Summer, Fall, Winter... and Spring gives a much similar experience and just the tranquility it evokes in how beautiful its simplicity is made out to be is where a unique experience comes out. There are lots of words to be said about the serenity that can be found in such a beautiful work of art like this, truly a film to define its respective decade. Like the seasons, the cycle of life repeats, but the details to the emotion in here, that's really something I don't know how to put my finger on.