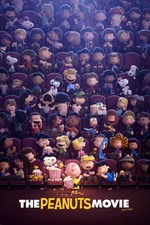 Having grown up with the Peanuts comics and cartoons it was quite a surprise to see that I came out of The Peanuts Movie having enjoyed what was on the screen. I was admittedly rather skeptical mostly because I find a lot of family movies nowadays to offer nothing by repeating similar trends off others and in the end, not presenting much of a reward for the adult viewers. It seems The Peanuts Movie aims to create its appeal towards those nostalgic for the cartoons and for those who grew up with these irresistible characters, what's not to like?

The animation is already one thing that can cue signs of paying tribute to the simple approach you're going to remember from the comics and those cartoons. It's nice to see that it's given quite a new look for a newer age, and it is a perfect way of throwing back to just the beauty of simplicity. It's easy to tell it's clearly replicating what the comics and the cartoons were like and at that, it really works. You can tell from that alone it's attempting to be a loving tribute.

If you've watched the cartoons what's also rather nice to see is just how much the film keeps in touch with their spirit. The likable Charlie Brown, like always, has sought to make himself better to the point of overreaching. There's no need for a meaningless update to a modern day and age because the characters still have their impact in today's culture like they would back when they first came about. So much so, it strikes so much nostalgia within those who have a dear connection with these characters.

The spirit alone is already enough to go and overshadow what was a rather predictable storyline. It's rather easy to guess where it'll be headed, with Charlie Brown trying to head for the new girl in school, and that might probably be the only real gripe with it that's on my mind. It's a character arc that seems a little too familiar for myself, yet at the very least there's more being offered to distract from this particular gripe.

I'd highly recommend giving The Peanuts Movie a watch especially if you were rather close to the comics like myself - it'll be exactly what you would want it to be. For once, it's a family film that knows its demographic and how to find its appeal within this range. If you weren't as close to the comics then it'd probably be a lot tougher to get into what's offered, but as a longtime fan it's nice to see childhood memories coming back.