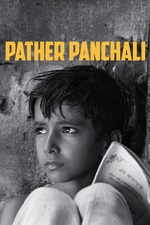 At any given mid-level film festival, audiences are almost guaranteed to come across a very particular brand of familiar "festival film". A slow, "simple" film with sparse narrative, usually set in some "exotic" (i.e. non-American/Western European) location, about the everyday lives of "common" (read: poor) people, full of "lyrical" and "naturalistic" cinematography and relatively little dialogue. The film's protagonist will more often than not be a child, through whom the audience can observe with "innocent wonder" the simple, rural lives of these people. Critics will invariably praise the film for it's "warmth" and "humanism", and almost as inevitably the film will be pleasantly unremarkable and largely forgettable.

Even more so than the work of Yasujiro Ozu (more or less the patron saint of this style of minimalistic "humanist" cinema), Satyajit Ray's Pather Panchali plays like the template for this entire all-too-familiar brand of "respectable" art house cinema, for better or worse. All the aforementioned hallmarks are here, and while the film probably deserves credit for spawning so much acclaimed international filmmaking, this type of "humanistic" neorealism almost never fails to underwhelm me. I found myself often bored with this, for many of the same exact reasons that I've never cottoned much to Ozu's work, or De Sica's, or Kiaorostami's, or Naomi Kawase's, Victor Erice's Spirit of the Beehive, Tran Anh-Hung's Scent of Green Papaya or even Charles Burnett's Killer of Sheep to name just a few prominent and well-loved examples (all of which surely have some of Ray's film in their cinematic DNA).

I worry that any criticism of this film runs the risk of sounding like Francois Truffaut's infamously unenlightened response that he "didn't want to see a movie of peasants eating with their hands" (just imagine the shit storm of social media outrage his remark would have been greeted with today, had he been writing for, say, The A.V. Club). And yet, while watching the film my mind did return yet again to Orson Welles' famous quote "I know that directors find serious and sensitive audiences for films where people sit around peeling potatoes in the peasant houses." I, too, know that there are people who thrill to this type of naturalistic "humanism", but at this point in time I simply cannot bring myself to give a shit, as essentially well-executed as the film may be.

I hadn't seen one of Ray's films in a long time, but I've actually seen a number of his '60s films back when they were streaming on Netflix in horrendous quality. At the time, they struck me as a somewhat cruder and less sophisticated counterpoint to the innovations and trends happening in European art films of the period (so shamefully Eurocentric of me, I know, I know). And while nothing here feels as clumsy as the symbolism in a film like Nayak, I didn't actually find Pather Panchali to be an improvement over those films, even with Criterion's impressive restoration. The newly crisp visual quality certainly helps somewhat, but I still don't find in Ray the same level of formal innovation that makes Ozu's like-minded work (just barely) more engaging. Sure there's some nice "lyrical" imagery of nature, but Ray doesn't show any particular aptitude for how he shoots things (aside from a somewhat bewilderingly disjointed sense of spacial continuity). He seems to use the camera mostly as a recording device.

For what is ostensibly the first installment of the so-called "Apu Trilogy", I found it rather remarkable how little Apu actually does in the film, beyond looking at things with wide-eyed "innocence" or whatever. Not that he's particularly terrible or precious as far a child actors go, rather he doesn't actually serve much purpose in the film's overall narrative. With Apu's role more or less reduced to looking "cute", and the Auntie's to being "endearingly" crotchety (or something), the film is ultimately more than anything about the relationship between the daughter, Durga, and their mother (the father spends most of the film away from home for inexplicably long periods of time). Although, as studiedly understated as the film is, the "story" doesn't really matter a lot of the time. That is, until someone dies, something that I thought Ray handles... awkwardly, if not exactly embarrassingly. More than anything, it just feels a bit tonally off that the film so largely undramatic should occasionally fall back on some pretty generic melodramatic tropes at times.

I don't want to imply that Western audiences only lavish praise on Ray's film due to some sense of "white guilt", but I do have to wonder how much a certain knee-jerk liberal impulse does kick in when confronted with a film concerning third-world poverty. Is it okay to admit that you find films like this dull and boring? Again, I'm sure there are people who genuinely respond to the gentle, low-key "warmth" that these films are generally touted as possessing, but does that really account for how unanimously this film has become canonized? Of course, like I said above I feel pretty much the same way about Ozu's films, or Italian Neo-Realism, so one should probably take what I say here with a grain of salt. Maybe I am just a cold, unfeeling, and obliviously privileged white American dude who can't appreciate the subtle poetry of rural Indian life on display here. I dunno.