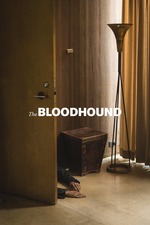 Admittedly, I'm probably overrating this one somewhat considering I watched it immediately after Come to Daddy (legitimately the worst movie I've seen in over three years) to wash the putrid taste from my mouth, circumstances in which almost any film would have seemed like a masterpiece simply by comparison, let alone something as perfectly calibrated to so many of my aesthetic soft spots as this happens to be.

A lazy, cynical viewer might dismiss this as the house "A24" style we're all familiar with: The static, composed wide and medium shots. The slow, lingering zooms. The comically mannered performances and "stilted" line deliveries. A cumulative effect which many viewers seem to find "creepy" but which for me more than anything, when executed correctly, plays as being hysterically funny.

The obvious comparison, of course, is to Yorgos Lanthimos, or more specifically his collaborations with screenwriter Efthymis Filippou, in my opinion the figure most responsible for what's been dubbed the Greek Weird Wave (there's a motif in The Bloodhound of a man walking on all fours which immediately brought to mind the bear-man from Babis Makridis' Filippou-penned L).

A brief aside here about Lanthimos. It's easy to forget now that this oft-imitated filmmaker was himself not received as being all that original by my peers back when Dogtooth was making (weird) waves. Back then we all compared him (not incorrectly) to Michael Haneke and Ulrich Siedl. This is simply to say that the things which make an artist or their work distinctive in hindsight might not necessarily reveal themselves immediately.

Does this mean that the writer/director of The Bloodhound, Patrick Picard, is a Lanthimos-level talent? Only time will tell, but I think he's shown himself to be well on his way judging from his feature debut (it's been well over a decade since I've seen Lanthimos' Kinetta, but from what I recall I'd say that Picard's is easily the more accomplished fledgling effort).

There's the barest hint here of the aforementioned A24-style "elevated horror" tropes, at least enough to get the film produced and sold as a horror film, but more than anything what I got from this was a very funny, albeit it odd, comedy. Granted, my sense of humor isn't everyone's taste, but I found myself cackling for nearly every minute of the film's brief 72-minute runtime.

As much as the Lanthimos influence is obviously apparent, Picard's writing has a slightly different tone. Deadpan, yes, but less blunt and mechanical, more stiltedly, comically verbose. Not quite Whit Stillman, perhaps, but Stillman run through Google Translate a few too many times. Picard also seems less interested in relieving the tension through bursts of aggression than Lanthimos, instead just letting every scene/exchange awkwardly trail off.

It helps substantially that Picard cast two actors (the film is essentially a two-hander) capable to rising to the task of this tonally tricky material. No doubt Liam Aiken's experience acting in Hal Hartley's films was good preparation for the mannered deadpan required of him here, but his co-star Joe Adler is easily just as good, and probably gets most of the film's best lines.

The scenario lifted, loosely, from Poe's oft-adapted Fall of the House of Usher*, is obviously just a pretext for the odd dialogues, not to mention a nifty way to utilize a single location and limited cast, hence keeping the budget down, but it's a fairly canny concept just the same, not least because it already provides the pretense of sellable "horror".

Like Robbert Egger's The Lighthouse, the film unfortunately only gains "relevance" in these (still) pandemic-stricken
times. I'm sure it would be just as funny regardless, nevertheless there's an added layer of... something, these days, watching a film about two guys in an isolated house with nothing to do but get drunk and, memorably, have sleeping bag wrestling matches.

*This reminds me I should probably, finally, get around to Jean Epstein's likely more faithful Usher adaptation, one of two notable versions released in 1928 alone. The other, a short directed by James Sibley Watson and Melville Webber of Tomatos Another Day fame ("fame"?), is visually striking though probably just as loose an adaptation in its way as The Bloodhound (you can watch it here).