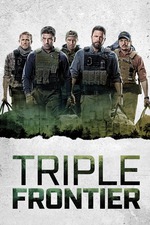 One of the best Netflix Original movies to date, Triple Frontier cashes in mostly because of its stacked cast. Triple Frontier doesn’t go without its noticeable flaws that mostly fall in the last 40 minutes. But the good outweighs the bad making it a very enjoyable movie watching experience.

Two things carry this film from mediocrity and that’s the infectious chemistry between our leads and the phenomenal cinematography. Even though Oscar Isaac or Ben Affleck don’t give career highlight performances here, the performances from Charlie Hunnam, Garrett Hedlund, and Pedro Pascal give stellar performances. Charlie Hunnam and Garrett Hedlund especially. Once our leads are together, the writing and dialogue between them is convincing and authentic. The movie’s brotherhood approach alone made this viewing worth it.

Saying this film is shot well is an understatement. Coming off being the cinematographer for films like Fury and End of Watch, Roman Vasyanov picks up here with debatably his best work. The cinematography is crisp and alluring. Whether it was gorgeous shots of Brazil, or it was impressive shots and framing of our leads staking out a drug cartel compound, the cinematography here is the best of the year so far. Triple Frontier’s editing is also very satisfying and versatile.

Besides those key standouts, the rest of the film is only average. While the action is entertaining, it isn’t anything new. The action is very basic and that was kind of disappointing. While the story does explore some new grounds in drug cartel films, at face value it’s just another drug cartel based film that falls above the average mark. Then the biggest problem that faces Triple Frontier is its second half. The pace and narrative becomes very uneven. There is some key highlights throughout that second half but it’s mostly a let down compared to the first.

Triple Frontier is a good film just not a great one. It’s very likable and the ease of access to it since it’s on Netflix I encourage anyone to see it if they’re interested. Realistically Triple Frontier lands at a 3.7/5 for me.