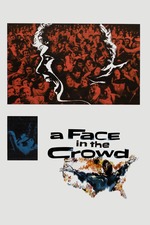 Having failed to see this movie before the 2016 election, I've put off getting around to it owing to my immense, eye-rolling aversion to the insistence of retrofitting every political piece of American culture, no matter how old, to be "about Trump." Yet there's actual truth to that charge here, albeit not, perhaps, in the way people think. Yes, Lonesome Rhodes is a vulgar brute, a snake-oil salesman who uses a cornpone, man-of-the-people image to mask a purely mercenary narcissist in it for the attention, but the film also pointedly contrasts him against his cultural counterweight, businessmen whose stuffy "dignity" barely hides the same base impulses of control and greed. What A Face in the Crowd posits with shocking insight at the dawn of the age of television is that the only true freedom that can be enjoyed by the average American is one's choice of the spokesman selling us shit. Suits will argue over the right tone to sell pills that are, fundamentally, placebos, and politicians will massage their beliefs and identities to strike the right aura. Rhodes is a bullshit artist, but his flagrant willingness to be one on some level feels more honest than the hemming and hawing executives who blanch at his methods but funnel their useless crap through him just the same.

And what a performance by Andy Griffith. Physically overwhelming, such a born salesman that Rhodes sometimes gets so close to the camera it seems like he might burst out of the screen to give you one of those car salesman handshakes that violates all norms of personal space. His laugh, phlegmatic and eardrum-bursting, is almost always filmed in a close-up of Griffith's face, his jaw open so wide he resembles a python unhinging it to swallow a create larger than himself. Griffith plays Rhodes as if Elvis had decided to become a huckster rather than an artist, pouring all of the rock star's sexual energy into hocking sugar pills and mattresses.

Speaking of, it's funny that Kazan, who had no choice but to soften the flagrant sexuality of A Streetcar Named Desire to pass Hays code rules, pushes the lasciviousness of this premise as far as he possibly can, capturing the way that Rhodes's overpowering personality ripples out in waves of pheromones that send women into trances. Watching him instantly concoct a pitch for useless pills as male enhancement is like watching young Arthur pull the sword from the stone, the fulfillment of a destiny he did not even know was his. Griffith naturally steals the spotlight, but I'd be remiss not to mention Patricia Neal, who handles the true moral arc of the film from Marcia's initial infatuation with Rhodes through outright lust and then total revulsion at both her complicity and her affections. The little gurgle of a self-loathing sob she unleashes after sinking to Rhodes's level by demanding half of his dirty money since that's all she can really hope to get out of this relationship is shattering.