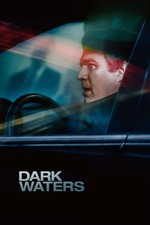 From the moment that the film opens in 1975 with an extended tribute to Jaws, Dark Waters becomes an exercise to see just how much aesthetic care and precision can be brought to bear on the increasingly moribund Very Important Issue thriller. Haynes films the poisoned land of West Virginia with desaturated tones that give it an apocalyptic tone (complete with a field of scorched earth and burial mounds for diseased cows that looks like something out of the Great War). He then contrasts that with Midwestern hubs like Cincinnati that look, in comparison, like the most modern and sleek cities in America, giant office buildings framed to look as if they are colliding with each other at sharp angles to create an Escher-like mass of buildings that have neither entrance nor escape.

It is in these gleaming buildings, where frosted glass on conference rooms obscures closed-door deals and jaundiced yellow lighting highlights the cynicism of hashing out meagre settlements for colossal malfeasance, that Haynes truly digs into the despair at the heart of this story. As the end titles attest, this is not a story with a happy ending, and indeed for all of Rob's draining fight, the best he really can hope to accomplish is to make people aware that the entire planet has been irrevocably poisoned.

In that light, even the shots passing by the bright, over-chromatic signs of various chains and businesses, or the unnatural seafoam and blue tints here and there come to represent an ominous reminder of the way every little convenience or eye-catching thing about our lives might be killing us and we, regardless of political alignment, are on some level willing to accept it and we are all powerless to stop it. That Haynes and Lachman wanted to shoot on actual film, with all its own attendant photochemical processing, to implicate the movie itself, is a testament to the sheer depth of thought that went into every composition.

(As a sidenote: the scene of a bigwig legal dinner where Haynes briefly but clearly shows that all the waiters are black men in tuxes is such a pointed but tacit expression of the power dynamics still at work on a story that feels like it should be a period piece but literally runs almost to the present day. It also offers an insight into William Jackson Harper's character, such a minor part, that further shows the level of work that went into every little thing here.)

It's easy to say, as I've seen in some positive reactions, that this level of aesthetic care elevates a script that likely would have been a by-the-numbers film in someone else's hands. But isn't that fundamentally the case of even the best scripts? They are, at heart, building blocks, as much a matter of prep work as storyboarding. Like David Fincher’s take on airport reads this decade, Dark Waters is not merely proof that direction can elevate the simplest material into provocative masterpieces but that there probably isn’t that much daylight between the best and most mediocre material before a director gets their hands on it.

One should also note how the actors imbue the script with a verve you don’t often see. Ruffalo bursts into an already overcrowded best actor field for the year with a performance of such surprising physicality: we meet Rob hunched over with the insecurity of his roots and the undisciplined manner of his upbringing, hunched over and shuffling where his pampered colleagues stride with the confidence a lawyer should project. As the pressure of standing up to one of the largest companies on Earth erodes Rob’s health, he only slouches more, taking on a simian appearance with his jutting lockjaw and fists clenched and hanging low like he walks on them. Rob’s big showstopping monologues about corporate greed feel less like moments to lecture the audience than expressions of pure anguish, to say nothing of guilt for having defended such companies all his life. Watching him here is like watching an alternate reality where Russell Crowe didn’t make The Insider until this year, bringing all his current buried menace to the role.

Likewise, Anne Hathaway could easily have let the script’s more pointed references to Sarah having to give up her own law career for the sake of children say everything about the character, but she uses those lines as a launching point to upend more typical scenes of the alternately supportive and criticizing wife, imbuing each scene with years of buried rage and resentment at giving everything up for Rob, only for him to potentially piss away their lives tilting at windmills. Watching the way that Hathaway unearths all of Sarah’s suppressed emotions makes me think that she could have run circles around Johansson’s part in Marriage Story. And all of this is leaving out sublime supporting work from Tim Robbins as the boss compelled by sheer moral inevitability to support his employee's quest (while still finding every way to punish him for making him care), Bill Camp as the gruff, slowly collapsing farmer, and others who manage to convey all the symbolic roles of a film like this while finding naturalistic beats to express rawer emotions of pain or annoyance.

This is one of those “they don’t make ‘em like this anymore” movies that makes you appreciate that, with rare exception, no one ever really made movies like this. As dramatic an upheaval and minutely observed expression of generic tropes as The Insider, and a film equally worthy of study and appreciation for years to come.