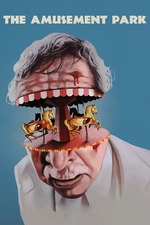 No other horror master, not even Raimi or Carpenter, better understood than George A. Romero the thin line between terror and farce that defines bewilderment and powerlessness. The Amusement Park compresses his satirical chills into a dense short that doesn't so much move forward as constantly squeeze its baffled protagonist until he is propelled against his will. The relentlessness of the pandemonium makes the amusement park metaphor seem oddly logical as your brain is overloaded with the sensations of the elderly characters' increasing exploitation and destruction, a state that only wealth can ameliorate, and even then for only so long as they are slowly dispossessed of their goods on their way to being sped toward the grave. Romero throws in blink-and-miss-them details that only broaden the queasiness of the atmosphere (Death riding a merry-go-round, a priest smiling as he gently pulls a young boy aside as the kid moves to leave the park), and his use of sound in creating an endless cacophony of carnival music and overlapping, ever-contentious dialogue that becomes too stressful to bear even as Romero buries some of the funniest jokes in the din. The editing and sound also plays out like an early attempt at more contemporary exhibits that seek to capture the sensory deprivations and overloads of what dementia feels like.