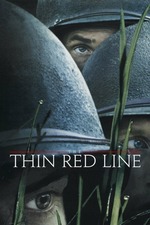 With the exception of some of Sam Fuller's work, perhaps the only moral war film ever made. Be they propaganda or anti-war screeds, too often war movies fit into Fuller's estimation of "recruitment pictures," and it's a remarkable coincidence that Malick's film appeared the same year that arguably the most blatant recruitment picture of the last 20 years, Saving Private Ryan, was released. Spielberg's film played at horror but cared too deeply for valorizing its characters' sacrifices, inadvertently ensuring that its meat-grinder nightmare stick would largely pad out lists of the greatest action scenes in a total reversal of intent. Malick does not shy away from gore himself, but his camera manages to take it in either in objective, cold takes that clash with the elegant motions elsewhere, or in fleeting glimpses that quickly shy away in revulsion and grief.

Malick's soldiers do not talk like soldiers, not because their thoughts are too intelligent or sensitive but because one would hardly have the time for casual philosophy while ducking artillery and suppressing defilade fire. Yet in a preamble to his modern output, the abstract ruminations ultimately reveal certain truths about both the characters and themes, paradoxically using long-winded digressions to speak fundamentally. We get bleak archetypes—the AWOL pre-hippie who goes native only to be confused when the violence brought to Guadalcanal infects the indigenous people; the career officer who is willing to stack corpses to reach the next rung of the military ladder; the homesick lover whose constant thoughts of his sanctified wife prefigure a heartbreaking letter from home; the capable front-line captain whose good judgment wins him the scorn of his more bullish C.O.s. Any one of these could have made for a deeply cynical film, but Malick uses them to both demystify war and make it more mystical than ever. Crucially, he suggests that such overwhelming conflicts are an aberration as well as an upscaled version of a naturally violent world. A Koyaanisqatsi-like worship of the unmolested world over evil modernity this isn't, instead revealing a complicated, ambivalent relationship to man's impact that has underpinned all of his future features. I'm not sure if this is the greatest war movie ever made, but I can't name many I'd place on its level.

Portrait of a Young Girl at the End…