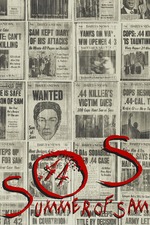 At 140 minutes it's a strong look into a group of lives that are heavily affected by these murders even if they don't think they are. It's paced really well throughout, I was hooked from the opening scenes. This film inter cuts the murders from the story which is a great storytelling device, it's used because it doesn't take away from the story but adds what it needs to be and that's a character driven film. The film is a boiling pot of character, it works its way through with situations and tensions that just increase and increase to the point of overload. I do have one problem and that's the infamous orgy scene, it might work in the film overall but it's just a little too much in a film that's full of situations that are difficult to watch. The performances are excellent, Leguizamo is fantastic in his role,m. I haven't seen much of his serious performances except for Carlito's Way and Collateral Damage with the latter a push for dramatic. Here he really played the character well and really engaged me in his life even though he's not the most likeable character. Adrien Brody was also great as Richie, his sub plot really made for an Intresting comparison with the rest of the story and really dug deep with the 8 million different stories quite. The supporting cast are also great and if I'm honest I didn't have any problems with anyone of them, everyone character serves a purpose but with one exception and that's Spike Lee's cameo role, it was just a tactic to star.