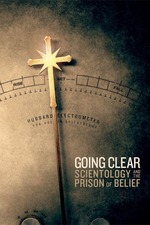 Although Alex Gibney’s Going Clear... and John Dower and Louis Theroux’s My Scientology Movie were released very close to one another, they don’t feel as though they were engaged in a competition for the title of the ultimate documentary about The Church Of Scientology. In fact, they are quite complementary: Gibney’s film is more informative and objectively comprehensive, while Dower-Theroux’s work is more interesting and thought-provoking. Thus, I think both films should be watched – perhaps even side by side – as they together form a stereoscopic image of The Church which is an oppressive cult, a sinister lobbying group and a tax-evasion scheme all hidden behind the innocuous banner of a self-help group with a global reach and celebrity appeal.

The most appealing aspect of Gibney’s film, which is a more traditional documentary in terms of structure and treatment of the subject matter, is the sole fact the filmmakers had access to a good number of former members of The Church Of Scientology like Paul Haggis, Mark Rathbun (who is more of a central character in Theroux’s film), Mike Rinder and a bunch of others. Their comments in combination with carefully chosen archival footage and diligent storytelling on the filmmaker’s behalf form a well-sourced and informed piece of criticism aimed at the phenomenon of Scientology.

To sum up, Going Clear... is the documentary one would expect to stumble upon on TV, as its mission is to be accessible to wider audiences. It is hence an interesting conversation-starter. On the other hand, it is nowhere near as conceptually audacious and bold as My Scientology Movie, which is definitely more difficult to process at times. In the end, if I had to nail my colours to the mast, I would go for the latter, but I am more than happy that both films exist.