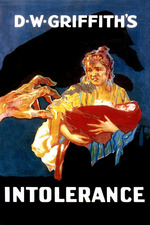 Intolerance: Love's Struggle Throughout the Ages 1916 ★★★½

Regardless, it tends to be held in greater esteem, for minus some pretty blatant misogyny and arguable sectarianism, this film is surprisingly ahead of it's time - socially and technically.

Intolerance: Love's Struggle Throughout the Ages is even more-so ambitious than The Birth of a Nation, with four different plots, thematically related, being presented to display intolerance's rampant destruction of all that is fair throughout the course of history.

The fall of Babylon to Cyrus the Great of Persia in 539BC, is depicted in the Battle of Opis. The Crown Prince, Belshazzar, is betrayed by the High Priest of Bel, due to intolerance that is stemmed from the worshippers of two rival gods.

The persecution of Christ, 'the greatest enemy of intolerance' in approximately 34AD is also shown. Griffith presents his miracle at The Marriage at Cana, the passage of The Woman Taken in Adultery and his subsequent persecution due to the intolerance from the corrupt and hypocritical Pharisees.

The Saint Bartholomew's Day Massacre of 1572 is the next story presented, when the protestant Huguenots, headed by Gaspard de Coligny, were slaughtered by catholic mobs, the intolerant Catherine de' Medici, mother of King Charles IX, instigating the massacre.

The final and most prevalent story presented is one of contemporary America, as a young woman attempts to wade through the sea of modern intolerance. Conservative women of reform, intolerant bosses, the gritty underground crime scene and the unjust justice system all plague her attempts at work, love and motherhood.

These four plots are all related by a singular image: the rocking of a cradle, uniting time and circumstance in the name of love; in the face of intolerance. Of note too, is that three of these storylines contain love in some manner; pure love, manipulative love, unattainable love, depraved love. Only the modern storyline contains any kind of benevolent love, with the other examples being accessories to intolerance as opposed to opponents of it.

In theory, this is an incredible, sprawling, epic tale of human nature. In execution, however, I'm not entirely convinced of Intolerance: Love's Struggle Throughout the Ages' narrative quality.

As was true in The Birth of a Nation, Intolerance: Love's Struggle Throughout the Ages suffers from some deeply rooted narrative flaws. Particularly, two of the storylines, the Saint Bartholomew's Day Massacre and that of Christ, are very underdeveloped. The Christ one is poor in particular, for only a short introduction, two short depictions of miracles and his crucifixion are actually shown. There is no real development of its plot, rather being a jarring series of events in the life of Christ than an actual cohesive plot. Intolerance is only really alluded to passingly. The Saint Bartholomew's Day Massacre storyline is better, but still suffers from severe underdevelopment and lack of reason to care. The main character is hardly present and so the rather dramatic events which will occur will simply just estrange an audience rather than invest.

Of the historical plotlines, the Babylonian one is certainly the best. It is developed and sufficiently relevant. However, it still suffers from some pretty serious issues. Namely, the main character whom this plot revolves around, the Mountain Girl is dislikeable. She's annoying and manipulative and brash. Her infatuation with Belshazzar isn't really relevant to much at all. Her love is never even remotely compared to that of Belshazzar's wife, and remains ultimately inconsequential to the sequence of events. She also brought an unwelcome air of modernity to the Babylonian plotline, and frankly, didn't even need to exist. It would have been much more effective and efficient to concentrate the plot specifically on Babylon's fall. Throughout the entirety of these historical plotlines, all that I could think of was how much I wanted the plot to return to the modern one, which is an utterly fantastic narrative. It gets by far the most runtime and has by far the most compelling characters and story. The injustice that is experienced throughout is genuinely heart-wrenching, and each of the characters are accessible to an audience. The plot is more grounded in the theme of intolerance than spectacle, and benefits significantly as a result. There are two solutions for this film: either The Mother and the Law, the title for the modern plot, should have been the only story, or the film should have been significantly longer. Despite the charm of Griffith's ambition, the former would have likely been the best option. The screenplay overall is a mixed bag, partly poor and partly great, finding itself ultimately stuck in a state of mediocrity, maybe even verging on poor ness.

Similarly to The Birth of a Nation, the real quality from Intolerance: Love's Struggle Throughout the Ages comes from its technical aspects. The cinematography is extremely good, many of the shots and movements being so massive and incredible, with mise en scène hardly rivalled even by films today (though some of the costumes are very noticeably costumes). And its cinematographical excellence is not only for its grand and sweeping nature, but also for its expert and natural for the time simplicity. Tighter framing is used and applied appropriately, making for some of the silent era's best and most iconic shots. Though it remains great however, I don't believe that Intolerance: Love's Struggle Throughout the Ages' cinematography succeeds to the extent of The Birth of a Nation with its consistently weighty and substantial shots, both in terms of blocking and framing.

In terms of editing, the trend of similarities between this and The Birth of a Nation remains constant, due to the fact that, as is the case with The Birth of a Nation, Intolerance: Love's Struggle Throughout the Ages' best quality is its editing. When people attempt to dispute Griffith's importance to film as a medium, one need only direct their attention to his editing. And the editing here in its ambition, is genius. Cross-cutting is applied so much better than in The Birth of a Nation, the shot-to-shot effect being just as great as in Griffith's previous endeavour the year prior. It's paced far better here than in The Birth of a Nation as well, scenes flowing far better. And that final scene, which I do believe is one of cinema's greatest ever, may have its quality attributed mainly to the editing. Tension and excitement are so effectively applied in this scene in particular, that even modern audiences will be just as responsive to it as one from one-hundred and five years ago. An example like this scene really does cement the sentiment that Griffith is one of cinema's all-time greatest editors. As the inevitable tragedy of intolerance over love ensues throughout three of the plots, the film finally folds on the modern story, as the four plotlines are inter-cut so well between one another. This was the Odessa Steps before the Odessa Steps, and if anything this scene ought to be taught in schools over the final scene from The Birth of a Nation.

There isn't really too much to say about Intolerance: Love's Struggle Throughout the Ages' acting that wasn't said in my review of The Birth of a Nation. It's great, and has a subtlety not prevalent in film at the time, though still suffers from melodrama of the time. It's a shame that Lilian Gish didn't hold a more significant re throughout, though ironically she does have the film's most famous shot. Regardless, Mae Marsh still excels.

Intolerance: Love's Struggle Throughout the Ages is a film that bit off far more than it could chew. And despite the spectacle, much of the film remained quite empty. For it was not in his extraordinary sets that Griffith excelled (in fact I found that these scenes were often so grand that Griffith struggled to effectively embed them in the film), but in his intimate, humble scenes. He was a director, who above all else, endeared. Intolerance: Love's Struggle Throughout the Ages has plenty of flaws, yet still finds a way to be good, these flaws coming off as rather charming. Griffith somehow was a true master of his craft before his craft had even been fully developed, and thanks to endeavours such as this, remains a pillar of film, and one of it's great titans, among such names as Chaplin and Hitchcock.