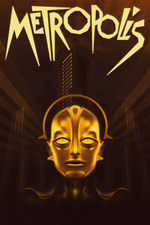 Whilst The Cabinet of Dr. Caligari may be the most important work of German Expressionism for cinema as a medium, surely Metropolis is not only its most famous and influential work, but also its best. It is the first proper science fiction film to be treated with depth and not as a novelty. It is one of cinema’s most timely works, following just four years after one of history’s very worst economic depressions and encapsulating German dissatisfaction of the time. And not only that, but it is a film decades - literally decades - ahead of its time. There is a Napoléon-esque experimentation and many elements of Soviet Montage present, as well as being one of the definitive works of German Expressionism.

It is a story with a deep overtonal romanticism, contrasting the super-wealthy in a utopian paradise with those who slave to maintain it, in a hyper-capitalist dystopia where man has been corrupted by greed. The head of the system and the hands of the workers work not in harmony, but in agony. The vices of each side are explored; the exploitation from the rich and the wrath of those who go about dismantling this system through violence - mainly through the inventor, Rotwang. Protagonist, Freder, who is the son of the owner of Metropolis, Joh Fredersen, works as the mediator between the head and the hand; the heart.

For something that could very easily have been trivialised, Metropolis is not so. The story is in fact, layered and of great narrative significance. It could have been easy to indulge in the spectacle and and the tropes and the operatic nature of it all, yet Lang does not, instead using these as means to a greater end. The general story manages to be massively endearing in finding the human amongst the emotionally baron. There is an overtonal coldness and aloofness, yet an undertonal life. The romance carries actual relevance to the plot and is genuinely endearing.

Regardless, there are still some rather trivial elements of Metropolis. The entire thing around Hel, Rotwang’s former lover and Fredersen’s dead wife, seems more like an excuse to incite their rivalry than a substantial plot line which plays significance to the overall narrative itself. There are as well, some moments of melodrama such as the killing of a worker which are ultimately empty. Melodrama is the folly of many silent films, and whilst the drama in Metropolis is genuinely exceptional, it does fall occasional victim to it. And whilst the religious imagery and allusions work generally, the satanism just becomes towards the end.

All of the characters in Metropolis, quite like the story, are both despite of and because of their exaggerated personas, extremely well developed and written. Freder, the naive boy whose integrity and lack of corruption has made him the mediator, makes for an investing protagonist. The father is domineering and holds  strong presence, yet is ultimately emotionally weak. Rotwang, whose wrath and envy has corrupted what might have been a virtuous plight. Maria, the selfless woman who serves as a catalyst for hope within the workers and whose virtue remains unwavering in the faces of those great forces of tyranny who dominate the film. And this further applies to the Thin Man, Josephat, Grot and other supporting characters. Metropolis manages to be substantially rich not because of its spectacle, but because of its screenplay.

Metropolis’ cinematography is where it succeeds to its greatest extent. It is framed in such an excellent way, all within the frame expertly presenting something or eliciting subtextual significance. The experimentation with shot sizes and composition in line with expressionist techniques pays off massively. The way subjects move within frames relative to one another, or how people are grouped to create images which are frankly disturbing, the individual being exchanged for the mass - more masses of pain than people. Space and tightness of shots is another thing excellently done, though perhaps not to it’s full potential as well. However, Metropolis might not just be one of if not early cinema’s greatest cinematographical achievements, but one of film as a whole’s best cinematographical achievements. Some of the visual effects strived for feel very dated but regardless even they tend to work.

The framing establishes Metropolis’ great camera work. The mise en scène makes it a titan of cinematography. It is now the stuff of legend, Metropolis’ mise en scène and for excellent reason. It is unashamedly expressionistic. You can tell the mood or tone of a scene in the sets alone. They are grand or haunting or disheartening, but always guaranteed to be effective. Costumes are ridiculously good as well, all of these elements being what makes Metropolis most notorious. Not to mention the incredible lighting as well, stark contrasts, white and grey, and shadowing all being very well executed.

Not all of what Metropolis strives for cinematographically comes off so well. With experimentation tends to come error, and while not prevalent, error remains present within Metropolis. This is still, alongside The Passion of Joan of Arc, silent cinema’s greatest cinematographical feat.

As stated previously in this review, Metropolis carries strong links with Soviet Montage, and is an excellent example of the execution of Eisenstein’s Theory of Montage. The experimentalism is applied especially well to the editing as well as the cinematography. Cuts are made according to the portrayal of themes or ideas and certain stylistic editing techniques are applied with such clear understanding and awareness. There are still times where the editing can be clunky and very occasionally cumbersome, but it still remains ahead of its time, a phrase appropriate for this film.

Metropolis is also an exceptionally well-acted film. Alfred Abel as Fredersen and Rudolf Klein-Rogge as as Rotwang stand out in particular. There are issues I have with the two main characters’ acting, Brigitte Helm as Maria and Gustav Frölich as Freder, though. There are times when they can lack subtlety in a way very typical of the 1920s film scene, though no less irritating. Even then, they both still have excellent performances, Helm especially excelling, possibly to the highest extent of anyone in the film at certain times.

Metropolis is fittingly like a film from the future. I said this before, but it is simply just so ahead of its time, that one may only awe at its influence. What Metropolis excels in, it excels in to a ridiculously high extent. However, there is a decent abundance of things which it does not excel in, which deals a blow to the rating. Regardless, Metropolis stands as one of silent film’s crowning achievements and a proud product of one of the very greatest movements in film. Many contemporary critics of the time argued that this was too long. However it succeeds so well and has such a surprisingly weighty screenplay, that I see no issue with the runtime. It truly is a masterclass in how one ought to go about a film stylistically, maintaining the substance which the style must compliment throughout.