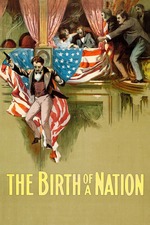 Before I begin, I feel I should clarify that my rating for this film is neither a reflection on my personal prejudices towards the film, neither is it a reflection of any exterior motives. I pride myself on being indifferent and for striving for objectivity in my reviews, and I promised to myself, long before I watched this, that I would not make an exception for this. I will also mention that as I believe art is universal and transcends time, I will not be making any liberties for this film's age because 'it is only a product of its time'.

The Birth of a Nation is vile. It stands alone in its infamy as the most offensive picture ever conceived, and is a harrowing reflection of contemporary cultural ignorance in 1915. There were times watching this, where I felt physically ill and enraged.

But the worst thing, and what perhaps wraps The Birth of a Nation in such low esteem and infamy, is the fact that this is a genuinely excellent film. Not only is The Birth of a Nation a great film, but it is also debatably the most important film ever made - more so than even Citizen Kane or Bicycle Thieves, or Breathless. In fact, the only film which I believe supersedes The Birth of a Nation in sheer importance is A Trip to the Moon. There were films before this, such as The Great Train Robbery and The Story of the Kelly Gang, which gave film its fundamental grammar, but The Birth of a Nation is the first film to take that grammar, and create a sentence. One may only stand in awe of how engaging and ahead of it's time this film is, whilst also managing to simultaneously be so repulsive and backwards.

And it's not only technical innovations that can be attributed to The Birth of a Nation. This, adjusted for inflation and with its highest suspected profit margain, sits comfortably as the sixth highest-grossing film of all time. This was the first film to be screened in the White House, unless you count Cabiria's screening in the White House garden not long before. This was the first truly massively popular film, easily the most famous film ever made for at least two decades. This is one of the, if not the first three hour long-plus films - though previous films such as Fantômas were longer, but episodic. When this was released, it was unanimously considered by all to be the greatest film ever made, an accolade that it maintained through public consensus for quite some time. And most importantly perhaps, this is often described as one of the catalysts for the reformation of the Ku Klux Klan. As much as we may like to try and forget this, The Birth of a Nation is a massive phenomena in American culture, that in its sheer ugly scale, cannot be ignored. We cannot keep our heads bowed in the face of this retched titan.

The narrative surrounding The Birth of a Nation is a rather formulaic one, all in all - though more-so ambitious at the time. Two families, one northern, one southern, meet, with their individual relations being established, and an overwhelming hearty fraternity being prevalent in the scene. When the civil war hits, they work on opposite fronts, and the tragedy of war is explored, though in a trivial manner. Two friends, not really firmly established or particularly endearing to the audience, are shown killing one another on the battlefield in an overly melodramatic scene, which just doesn't work.

Continuing on with the general plot, the second half details, following the assassination of Lincoln which occurs right in the middle of the film, rise of a new, oppressive black-run America, where the country falls into the hands of lawlessness and corruption, until the dissatisfied remaining confederates rally in the form of the Ku Klux Klan to re-establish order - I want to avoid confrontation, so note that I am saying this with a degree of irony.

The turn of events throughout, makes this a genuinely good narrative, though certainly flawed in certain aspects. The inter-laced historical events and enormity of the film are concentrated and embodied endearingly in the plight of the modest Cameron family. Overtonal emotions are captured throughout the film - I can even guiltily admit that I found myself morbidly invested at times. However, this still is a story that lacks a great deal of weight or significance, coming off at times as superficial, underdeveloped or melodramatic.

The romantic aspect is also established here between protagonists from opposite families, Ben Cameron and Elsie Stoneman in a relatively strange manner: having only seen a picture of her, Cameron keeps the locket containing her picture with him throughout the war, until they meet in a hospital and suddenly become star-crossed lovers. Perhaps their love could have been kindled in a slightly less strange way, but I digress; it really doesn't bare too much on the film. Because their story following that really is better.

On the character of Ben Cameron, he actually is a very good protagonist, a well-done coming of age story being created in the first half, and (at least by the standards of the film), him holding a great deal of integrity towards his beloved country and kin. However, there are certain unpleasantries about Ben that taint his character. It is not that he is a raging racist who forms the Ku Klux Klan, but that the way he goes about some of his actions are not very endearing to an audience. For instance, when Gus, the black man who attempts to rape an integral character, is brought to justice by the newly formed Ku Klux Klan, the scene and the way he is dealt with makes him come off as sympathetic, and Ben as cruel. The isolated framing, his disturbingly horrified face and unfair trial all create a sense of underlying tragedy to his execution. When a black governor goes to shake Ben's hand, Ben comes off as stubborn and intolerant. The issue (narratively) is not that Ben is a racist, it is that the way he is written and presented, at times comes off as ruthless or rude, without these flaws really being addressed.

Regardless, much of the other characters are good. Though Silas Lynch, a newly introduced black governor and antagonist, isn't particularly dislikable, and actually quite reasonable, until he almost comically tries to rape Elsie. Lydia Brown is another poor character, and I'm really not particularly fond of Austin Stoneman either. The concentrated protagonists are all great though, bar minor issues.

The Birth of a Nation, unlike in other areas, doesn't have a very good screenplay. It verges on being good and being decent, but a lack of real narrative density looms present throughout, even if it remains a genuinely investing plot, despite some of its more sickening aspects.

Cinematographically, however, The Birth of a Nation succeeds far more. Naturally for a film from 1915, the cinematography remains generally simplistic, distanced and unobtrusive. However, Griffith remains an early master of the camera. His framing is so effective. Almost always something is happening in the frame, a degree of life being omnipresent. The blocking and staging is always effective, and when the camera is distanced, Griffith manages to find a depth - a humble simplicity, that just adds to the atmosphere of the film. Huge responses are elicited from the viewer in Griffith's modest, yet effective framing.

Notably too, The Birth of a Nation is extremely well-lit, tinting tending to be effective too. And there is still a degree of ambition about the cinematography. Close-ups, used sparingly, are incredibly effective, and significantly wider shots are used to great effect as well. The camera movement during the rescue scene, adds an air of great intensity never seen at the time, making that scene one of early cinema's very greatest, with the urgency and heroism Griffith strives for being met.

The scale of The Birth of a Nation is incredible, the sets and costumes being of such a massive extent that just adds to the personalised scope of the film. However, the black face that is applied, I am prepared to mark down for. It is just poor. There are multiple characters that I didn't realise until long after their introduction, were meant to be black. It is just a deterrent for realism or audience investment, and remains as rather poor make-up.

There do remain flaws in The Birth of a Nation's cinematography. Certain shots are too wide or feel estranged, and a certain degree of boredom still rears itself from time to time, thanks to the naturally conservative style.

The acting can be melodramatic, or it can be endearing. Lilian Gish and Henry Walthall are great, easily early silent cinema's two biggest stars, and for a reason. They managed to be the first actors to really capture subtlety, even if the film remains very brash in its presentation. Some of the other performances are rather poor, as was the case at the time, but The Birth of a Nation generally stands as a very well-acted film.

In being cinema's most infamous film, it's most disgusting conception, The Birth of a Nation remains as one of its greatest achievements. I have never felt so sickened, yet engrossed. The great techniques I have described are applied to vile scenes. My respect for D.W. Griffith lies within a sea of irritation. However, I will say one thing on this film, or rather on this filmmaker: D.W. Griffith is the father of film, whether you like it or not. And by extension, I would argue that he was a good human being, even if a severely flawed one. One must understand of Griffith, that he made films to entertain, not to lecture. He made anti-Klan films before The Birth of a Nation and pro-racial tolerance films after The Birth of a Nation. It is evident, through his citing of historical sources, that Griffith tried to create a dramatic re-creation of true events, adapting The Clansman into what he believed was an historically accurate epic. He was a naive and easily fascinated man, by many claims, and became a victim of the lost cause. Perhaps this comes off as rambling, and I'm sure I may be coming off very unfavourably, but what I am essentially trying to say is that D.W. Griffith was a racist human being, but not necessarily the depraved one that he is understandably made out to be. He is in fact, deserving of respect, and it is a shame how he was neglected by the industry he nurtured in his latter years. I will never justify The Birth of a Nation. I will justify its creator. It is almost stereotypical to say, but such people and matters must be looked at as products of their time and their environments.

Unfortunately, this is good cinema, a film with an influence beyond measure. It is hearty, and investing and beautiful, yet evil, offensive and depraved. However, I have rated this film as I see objectively fit, and the genuine technical and narrative flaws really are quite abundant, littered throughout greatness. The screenplay in particular holds a hollowness about it. But still, for those of us who have experienced it, whether we like or not, The Birth of a Nation still stands as one of the singular most important films ever made.