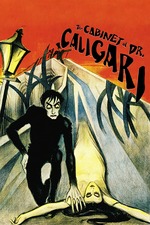 The Cabinet of Dr. Caligari is easily one of the most important films of all time. It was the catalyst that truly set about German Expressionism, and has found almost boundless influence - narratively and especially stylistically.

It is the now iconic story of the titular Dr. Caligari and his sideshow, Cesare, a somnambulist who has been in a state of sleep for 23 years, whom is used by this evil doctor to commit crimes around the area.

And there is an obvious contextual significance to the film, rooted in the very foundations of German Expressionism. This was a movement founded on a national consensus of pain, and films such as this are representations of said pain, through the art of filmmaking. And the story accommodates this.

For The Cabinet of Dr. Caligari does indeed have a narrative far denser than that of the time. Characters aren’t trivial; they each possess a complexity and weight irregardless of morality. The protagonist, Francis’ slow spiral down the rabbit hole of the circumstances at hand as well as his very sanity, Caligri’s obsession and his consumption by such greed, Cesare’s helpless ruthlessness - the signs of human amongst that which is not. All of it subverts what it initially presents, making for a massive and overwhelming unease and what is essentially the first true horror film in cinema.

The Cabinet of Dr. Caligari manages to narratively interconnect everything in a manner that is both efficient and effective. It is interconnectivity, used as a tool for subversion or that aforementioned ever present unease, which makes this film so disturbing even for a one which is a product of 1920. This isn’t a perfect screenplay. I don’t believe that the three alternate realities are particularly well executed relative to one another, and the romantic element of the film, or more specifically the proposed love triangle which is alluded to, doesn’t remotely manifest. Certain more minor things also play as detriments to the narrative quality, however The Cabinet of Dr. Caligri’s screenplay, quite consistent with the film in general, remains significantly well-developed eoped and far ahead of its time.

Perhaps what is most notorious about The Cabinet of Dr. Caligari is its cinematographical elements. This is the cornerstone of German Expressionist techniques because of how exemplary and effective they are.

This is very well framed. Though revolutionary in its own right, it is not the most revolutionary aspect of the film. However, it maintains a logic consistent with tone. Tighter shots are used very effectively, often to convey emotion, more often to convey disturbance or unease - that close-up of Cesare genuinely is haunting. And the wider framing, through the excellent mise en scène, also creates ominous overtones.

It is however in the mise en scène itself, that The Cabinet of Dr. Caligari fully excels. It is so utterly groundbreaking and unique and sharp and obscure and warped and overall wrong, that it creates and is the foundation of the horror which is laced in the essence of this film. The dystopian, artificial sets, the estranged consumes and props, the makeup. They all create an omnipresent and consistent lack of security which is taken advantage of.

This applies also to the lighting, being sharp and contrasting and rather deformed, adding specifically to the atmosphere of the sets. The use of colour tinting is well applied as well, another factor in the sheer brilliance of the lighting.

I think it is fair to say that The Cabinet of Dr. Caligari is a cinematographical masterpiece. The way the tone is visually exemplified in a manner which creates a constant discomfort is something so effective in the underlying essence of a film such as this. The shot selections or compositions aren’t always necessarily great or perfect, but on a general scale, The Cabinet of Dr. Caligari achieves visual excellence.

The editing isn’t necessarily a great element of The Cabinet of Dr. Caligari. It’s paced in such a way that it sometimes comes off as cumbersome, there also being some structural issues rooted in the editing. And though generally decent or even good for a film of the time, the editing manages to work and work well in context but not really transcend the art of editing itself. Even then, there still remains a general logic in the editing and there is nothing even remotely outrageous about it.

The acting from in particular Werner Krauss and Conrad Veidt is excellent, Krauss in particular managing to perfectly convey the complexities of Dr. Caligari in his performance. Friedrich Feher as Francis is at times great, though at times overly melodramatic to an extent that it leaves the realms of even the exaggeration attributed to the movement, though his performance remains overall, good. The Cabinet of Dr. Caligari is, despite some periodic melodrama, a well acted film.

The Cabinet of Dr. Caligari is one of cinema’s first great achievements and leaps forward. In practically every filmic aspect, an innovation of some sort can be attributed to this. I’ve mentioned it before, that I think art is universal and timeless, and so flaws which may otherwise be dismissed as products of their time are taken into consideration. This still is an utterly fantastic achievement in film and is on almost every list of essential films for good reason.