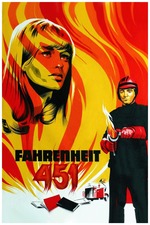 I am on a bit of a Truffaut tip at the moment having recently seen and enjoyed his latter-day historical drama The Last Metro (1981). Fahrenheit 451 (1966) is a fascinating cultural document not only for its singular take on a dystopian future world, adapted from the novel of the same name by Ray Bradbury, but also for being Truffaut’s first film in (vibrant!) colour but also his first – and last! – in a foreign language. It is also unusual for being produced after the heady early days of the French new wave of the late 1950s, when Truffaut stepped out from his role of film critic and into the spotlight as director with seminal movies like les 400 Coups (1959) and Jules et Jim (1962), and before the New Hollywood / Movie Brat era of the late 1960s and 1970s. Oddly for a novel set in the American Midwest, the film adaptation is British produced and filmed, with a mostly British cast bar the central protagonist Montag who is played by an softly accented Austrian (Oskar Werner). Its pedigree is enhanced by Nicolas Roeg’s role as cinematographer and a score provided by none other than Bernard Herrmann. What could possibly go wrong?

The main sticking point for me with Fahrenheit 451 is that it compares unfavourably to the near-contemporaneous dystopian sci-fi of The Prisoner, the psychedelic cold war series which was first aired the following year. Compared to Patrick McGoohan’s iconic show, Truffaut’s film seems somewhat stilted and – dare I say it – old fashioned, although both exude vivid retro charm. It is also difficult (even if unfair) not to compare it to George Lucas’s more grimly dystopian THX1138, released four years later, which is lifted in part by Walter Murch’s extraordinary sound design. Beyond Herrmann’s dramatic incidental score, Fahrenheit 451 is a conspicuously quiet film, and I wonder if this was a consequence of neglect or design: was it intended to evoke a very oppressive peacefulness of a society in which the wild emotion of literature has been excised, or just an oversight? There is a staid and stagey quality about the first half of the film that points towards the latter suggestion, the film lacking the raw energy and documentary quality of la nouvelle vague. While there are a number of evocative exterior shots, the interiors feel very much like flimsy studio sets.

The dialogue feels a bit stiff and restrained in a manner one associates with British people (and movies) of a certain vintage, exacerbated by Oskar Werner’s unusual diction. Werner plays a “fireman”, in a society in which the profession’s meaning has changed from someone who puts out flames to a brigade of censors who raid people’s homes in search of books (all outlawed) to burn. Which begs the question as to why he was chosen for the role? Was he selected for his Teutonic qualities to remind us of the book burning of previous generations?

The crew of firemen to which Montag belongs is not quite as sinister as perhaps it ought to be. I have to confess being reminded, unfortunately, of the UK children’s TV classic Trumpton ("Pugh, Pugh, Barney McGrew, Cuthbert, Dibble, Grubb"). But as the story progresses their fire-raising takes on a darker and deadlier turn. Yet Truffaut seems to linger over the immolation of numerous works of canonical literature to the point of catching some extraordinarily artful shots, including the peeling away of one volume page by page. Although partly intertextual allusion (an issue of Cahier du Cinema even appears self-referentially at one point), there is also a sense that in making the burning beautiful a point has been missed in some way.

The most memorable aspects of the film came for me in its atypical suburban and rural setting. Truffaut makes good use of modernist architecture to portray a world robbed of its passion and vitality. I was reminded of Kazuo Ishiguro’s Never Let Me Go and its 2010 film adaptation, which depict a dystopian future past which is recognizably like our own but with some sinister authoritarian undertones. The medical dimension of that novel and film, so relevant today, are shared in Fahrenheit 451, and indeed THX 1138, through the theme of mood-suppressing drugs. Montag’s wife, who overdoses at one stage, is also stupefied by bizarre interactive television shows that she watches on a wall-mounted flat screen television, in some of the film’s most efficiently satirical and prescient scenes.

The evocative final sequences with the “Book People” are a hopeful reminder of the indomitable human spirit and the stories that we have carried through the millennia - via oral tradition - long before the arrival of the printing press. If the outlawing of literature now seems like a quaint premise for dystopian sci-fi (evidenced in the “text free” opening credits) it finally makes sense: that it is ultimately the human connections that bind us and our narratives together rather than the medium itself.