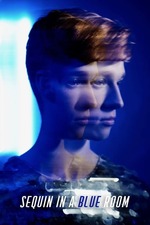 Ultimately, this tonal mash-up becomes kind of the whole point. Because growing up gay can feel like all of those genres, sometimes all at the same time.

I do have a problem with films by queer filmmakers that feel like they could have just as easily been directed by Mike Pence or Jerry Falwell, with their depictions of gay nightlife as some kind of dark, seedy underworld of anonymous hook-ups, lonely drag queens, and drug-fueled sex parties. I get that some gay spaces aren't always the safest or happiest of environments, particularly for gay youth, but is all the dark lighting and menacing horror movie music really necessary? This brand of sex negativity feels a bit jarring and outdated in 2021.

That being said, the theme of a gay teenager struggling to find himself as he navigates the digital world of social media and hook-up apps, felt like a fresh and intriguing take on the gay "coming of age" dramas I remember watching 20 years ago during my own formative years.

Like so many of those films, there were just enough striking, erotically charged visuals and sensual eye candy to keep me engaged and entertained despite the vapid, underdeveloped main character and flimsiest of plots.