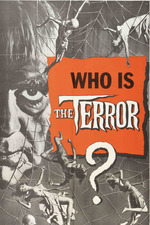 The Terror is a film that cannot be properly discussed without mentioning its notoriously troubled production. Right after Roger Corman completed The Raven, he had Leo Gordon quickly come up with the basic plot of a Gothic horror film and shot all of Boris Karloff's scenes in two days. The plan was to come up with a proper script later and shoot the rest of the film at a convenient time, but things got messy and Corman ended up having a variety of directors complete the film. Francis Ford Coppola, Jack Hill, Monte Hellman, and Jack Nicholson (Corman claims that Nicholson directed for a day, although Hill denies that Nicholson ever directed) all ended up shooting scenes for the film.

Considering that the production was so disorganized with numerous directors trying to shape Gordon's hodgepodge of Gothic cliches into something coherent, it's surprising that the film isn't unwatchable. Unsurprisingly, the film's plot is very weak, and about half of it is characters wordlessly walking around spooky sets/locations. However, Karloff's performance, the nice sets, and some weird, unintentionally funny scenes keep the film from becoming a bore, and during the last 10 minutes, the film becomes gloriously ridiculous schlock. There's an incredibly absurd twist at the end that you will never see coming unless someone has spoiled it for you; eat your heart out, M. Night Shyamalan.

The Terror is a mess, but it has a nice, old-fashioned Gothic horror atmosphere, and the last 10 minutes of it make it worth the price of admission. 4/10 (if the last part of the film wasn't so much fun, it would be a 3/10 or lower).