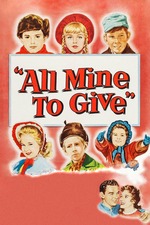 All Mine to Give

“Come here Rob. Thats a sign you’re grownup, but you see - It isnt given on anybody to know the future. You hope and you pray for guidance and you do what you can within your powers, because if you dont - if you dont - and the worst happens to somebody that you love... Well, then a man cannot live with himself.” - Cameron Mitchell

"All Mine to Give" wont put you in the cheery holiday mood you wish to be in, but its a family drama told gently and gently powerfully - considering the fact that it really isnt trying to say much.

Packed with strong performances from Cameron Mitchell and Glynis Johns as the parents of six, as well as strong newcomer turns from Rex Thompsan, as the mature eldest child of the couple as well as Stephen Wootton as his cap wearing brother who begrudedly finds himself the romantic interest of a pair of twin sisters. Alan Hale, Jr is the most known of the cast - and he is strong in a smaller role.