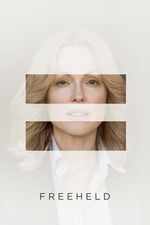 I didn't even know this film existed until I heard the Miley Cyrus song that plays during the end credits and realised it was from a film. Since then I just never got around to watching it.

Julianne Moore and Ellen Page give great performances as the leads, Moore obviously impresses and Page more than holds her own with the screen legend. Michael Shannon also turns in more good work.

This is such an important story and I'm so glad it was told, but I can't help but feel that it could've been so much better. It reminded me a little bit of Loving (funnily enough also featuring Michael Shannon) in how the couple's love is strong enough to fight the law. But the difference here is that the characters weren't fleshed out enough. Laurel and Stacie get some development in the first act, but it doesn't really inform the following plot points. Steve Carell's character was probably the most cardboard-like character I've seen in a film in a long time. He pops up like a plot convenience and that's all there is.

The great performances and legacy story can't help Freeheld from being a by-the-numbers real life drama, but it's so full of good intentions that I can't help but like it.

Also PLEASE can I be one of the people that rides on Michael Shannon's motorcycle? I'm literally begging!