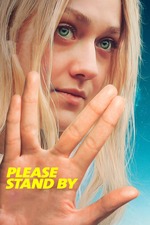 Autism, a Star Trek script and a powerhouse performance from Dakota Fanning.

Wendy, a girl with autism, needs to get her Star Trek script to Paramount Pictures in LA by February 16th in order to compete in a writing competition. With the deadline looming and no post available, she runs away with her little dog, Pete, whoni have to say, is the cutest dog I’ve seen a movie in a long time.

As you’d expect with a film like this, she meets decent people on the way, as well as a couple of bellends.

Both Alice Eve & Toni Collette give great performances as you’d expect from both. Especially Toni Collette who remains one of the most consistently brilliant actors of our generation. There’s also a great cameo from Patton Oswald.

Give this independent film a go. It may surprise you