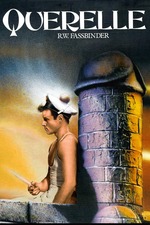 What a way for Rainer Werner Fassbinder to go out. Querelle may not have hit me the way other Fassbinder flicks have, but it’s such a personal and passionate project, it still demands your respect, if not your attention. The images are as beautiful as any of RWFs previous works. The stage design sort of reminds me of a Japanese movie shot on a soundstage. The studio’s sun just sits in frame, halfway set for the entire film, which is something I really dug. The lighting overall was gorgeous.

Even with my challenges with Querelle, there is still plenty to get out of it for me. I think the English language dubbing threw me off a bit, mixed with bizarre, stilted performances, poetic dialogue and this barrage of intertitles that never really improved my enjoyment of the picture. The movie feels barely linear and doesn’t care about plot or introducing characters in a traditional sense. It’s Fassbinder doing whatever he wants, working with a surrealists brush. I tend to prefer when he works with realism myself, but he can do whatever he wants, because I love him, and I want him to be happy. ❤️

Rainer Werner Fassbinder’s work has really moved me over the past year or so and I’m so grateful for all the work he accomplished in his far too short lifetime. This man passed away at the age of 37, leaving behind 40 feature films, 2 television series, 24 plays and a variety of other projects. He is one of the most talented and prolific filmmakers, or artists, I am aware of, and he did all this before the age of 40. I can’t imagine what other projects he would have gone on to create. If I could travel to another dimension to find any artists output after they died in our timeline, I’d choose my man, RWF. Rest In Peace 👑