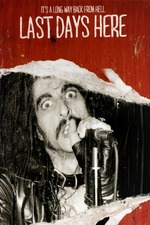 One of the most emotionally exhausting documentaries I've ever seen, LAST DAYS HERE follows the latter-day life and career of Bobby Liebling, singer of the '70s underground doom metal band Pentagram, who at the beginning of this film is literally wasting away from decades of addiction to heroin and crack cocaine.

Due in very large part to the tireless (and I mean TIRELESS) support/encouragement/devotion of his No. 1 fan Sean Pelletier, Liebling gets off drugs, but due to decades of leading a life of endless self-destruction, his fight against his own demons is only just beginning. Let's just say that every time the title card which reads "a few months later" pops up, I held my breath in anticipation of whether Liebling would be continuing recovery or in the deep, deep dregs of yet another relapse.

Disturbing, overpoweringly sad, ultimately cathartic (and not without some much-needed levity), LAST DAYS HERE comes with the highest of recommendations from me. An absolute must for fans of quality music documentaries, whether you're a heavy metal fan or not.