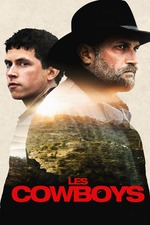 In its first hour or so, the unapologetic echoes of 'The Searchers' ring cloud and clear: Director Thomas Bidegain tells the story of Alain, tough, stoic French cowboy — there’s a subculture I wasn’t aware of — whose 16-year-old daughter runs away with her Muslim boyfriend, prompting a multi-year, multi-continent search to “rescue” a young woman who by all indications doesn’t want to return. The transition is fairly seamless (Ethan Edwards’ racism translates into Alain’s Islamophobia quite effortlessly), with her father and young brother hitting brick walls and dead ends all the way, ignoring all indications that “she’s not your daughter anymore.” But it’s his obsession, ruining his life and his relationships — and then Bidegain suddenly veers, tinkering with the homage before dispensing with it all together to become something quietly devastating, and (especially in its final scenes) staggeringly powerful. But even when it diverges from it source, the thematic link is clear: this is ultimately a story about responsibility, and the humanity that must compel it.