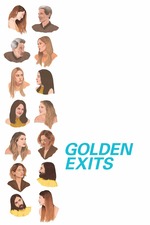 More to come but on the way out of the theater, I hit Alex Ross Perry really hard with a door. We made eye contact, and he said sorry first.

Funny how it took the Maryland Film Festival to put together an amazing New York double feature. Dustin Guy Defa’s Person to Person and Alex Ross Perry’s Golden Exits make for such a magically incongruous pairing. While both do manage to capitalize well on that magical New York City sonder, their approaches on the repression of emotions could not be more different. Whereas the former is far more optimistic, taking itself lightly with its final catharses paving the way for more hopeful horizons, the latter is fairly cynical throughout. After all, Defa is a romantic; Perry is a tragedian.

Watching Person to Person twice over a month (first at Film Society of Lincoln Center’s New Directors/ New Films Festival) yielded the same wholesome sense of joy regarding the film’s celebration of the diversity of life on the streets of New York after both screenings. It’s an absolute blast, filling itself with beat-poet intellectual types that hide behind their words before articulating their thoughts and feelings without an air of antagonism. Defa is more like a musician, composing the film like the jazz on his soundtrack, mastering each tone shift as the film switches from effortlessly funny and heartfelt beauty. Altogether, it is romantic with an old soul, reminiscent of the homely charm of local landmarks that give the city its allure. No attention is paid to those gentrified areas.

Golden Exits is a whole other beast. Similarly following an intersectional ensemble cast, the film poses two sets of the same people, divided by a generation of experience and life. An initial viewing focused on the misgivings of the older half of the cast (Adam Hororwitz, Chloë Sevigny, and Mary-Louise Parker) was an insufferable experience — even if by then, the intelligence of the film was already clear, but an immediate rewatch the next afternoon elucidated cracks of beauty: the younger half of the cast (Emily Browning, Jason Schwartzman, Analeigh Tipton, and Lily Rabe) legitimately seem to learn from the mistakes of their predecessors, killing their misanthropic, doppelganger idols.

The film is not unlike a contained experiment. Nick (Horowitz) and his wife Alyssa (Sevigny) live on the same block as sister-in-law Gwen (Parker) and new employee Naomi (Browning), fresh off the plane from Australia. His office is right around the corner, where he and Naomi work in archiving the “materials” of his dead father-in-law, thus conflating his professional and personal lives. He is a regular at the local deli, the local bar, and is a fan of repitition. An opening-scene maps out the exact nature of these relationships: Nick and Alyssa are unhappy together, and he and Gwen are at odds; his employment of another beautiful young student, and hints of past affairs — might be the cause of it. The unhappy family is tenuously connected and mirrroed to that of Buddy’s (Schwartzman), who is obligated to befriend Naomi, daughter of her mother’s best friend. He runs a sound studio with his wife Jess (Tipton), whose sister Sam (Rabe), in turn, works as a “glorified personal assistant” to Gwen. It’s a mouthful: two sets of husband-wife-sister-in-law-Naomi.

Structurally audacious, the film abides by a very specific and similarly contained set of rules. Parallel conversations fade to black. Only pairs are allowed; if a third is introduced, one of the initial duo must leave so those remaining can discuss them behind their backs. Regardless, the conversations themselves feel strictly client-patient — which Ross juxtaposes subtly with the Sevigny character’s scenes as a literal therapist — as one character spils their guts out, completely gnornat of the feelings of the other. Though the roles do not necessarily blur, the emotions felt progressively become less distinct, as characters and their real emotions, with the burden of the film’s runtime piling on, begin to reveal how they feel. A melodious acoustic score by Keegan DeWitt accompany the actors faces and do most of the talking for those resigned to listen.

I don’t know if any other film manages to capture the frustrating depravity of emotionally distraught Brooklyn-ites as well as this one does. The characters all feel like real people, even if their dialogue retains the same level of Perry-esque baroque literary influence that characterizes the rest of his films. The short 94 minute run-time is split seven ways but the characters all develop together, before making small divergences by the end. Golden rings stand out on married fingers and act as reminders of commitments, while lonely hands only don brass accessories. Its painful at times to watch the film progress, but the suffering of one pairing does not guarantee the suffering of the other, and the moments in which convictions are tested to different results really make for heightened emotional impacts. The autonomy is found to break from cycles of misery, and to differentiate oneself from the people around.

Golden Exits, in spite of its large, high-profile cast and ambition, upholds modest roots, and both it and Person to Person play to the charm of the city. It’s amazing work, but one can’t help but wonder if there’s something about that that keeps those city films from appealing to other audiences. Perry’s films (which all sit in the 70s on metacritic, yet in the 6’s on IMdB) always manage to find critical praise, but he, along with Defa (as much as can be said with only 2 featuers under his belt) and other New York filmmakers like Noah Baumbach, rarely ever manage to make impressions on national audiences. It may be partly due to the deluge of in-jokes that appear in the various works: a cursory example would be the appearance of the Anthology Film Archives in Golden Exits, which brought those in the audience familiar with the pillar of cinematic purity a lot of joy, but could be seen as a break in pacing to unknowing eyes; or the various cameos — Jake Perlin, Metrograph programmer, shows up in both films, but is particularly distracting in the background. Or maybe it has something to do with the deeper emotions — does it take a certain amount of weary cynicism to appreciate the clashing sentiment of Person to Person, or understand the frustrating entitledness of Golden Exits?