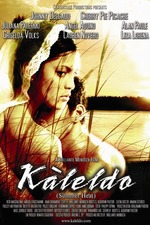 this is the second brillante-directed film i've seen (and his second chronologically too), i wasn't such a big fan of his debut, and while this is somewhat an improvement on that, it doesn't particularly feel like a step in any progressive direction

what was fascinating about masahista was that brillante's direction felt so assured—although i may not have agreed with his formal decisions in it, it seemed like he knew what he was doing and what he wanted out of it, and to some extent it felt like he was mostly showing off that he had some kind of artistic vision (though i don't think it was that good)

this one feels more standard fare, a kind of film that i've seen done before by many different directors, and executed much better. it's essentially three short films put together, with each one focusing on the life of a member of the family. for kaleldo, each focuses on a sister in her 20s and 30s as she deals with adulthood in a dysfunctional family

it's okay. it sounds more interesting than it actually is. i still think it's great that he's setting his films in pampanga and in kapampangan, telling stories that feel locally flavored yet universally relevant for most filipinos. i just found it a little too melodramatic and it felt like watching three episode of a teleserye as opposed to a fully formed film

not too impressed with this guy so far, not sure if i'll have the patience to reach his more internationally acclaimed work in serbis and kinatay