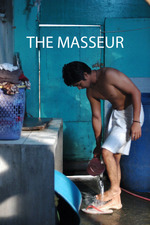 at some point i'm going to set this up as a proper brillante mendoza/21st century philippine cinema series, but as of now i'll just put out some of my thoughts while they're still fresh

brillante mendoza has been a director i've been actively avoiding like the plague, based on all the things i've heard about his films being controversially exploitative of the poor in the country—and while i have those bad associations with mendoza coming into these films, i'll try my best to be open minded about what he's trying to do

the reason why i disliked this has nothing to do with those negative impressions and more to do with the fact that i just found this really boring stylistically, structurally and thematically

two things happen in this film: there is a funeral, and there is a massage. throughout the movie the sequences are awkwardly and clumsily juxtaposed with one another (putting on the barong on the corpse / removing the shirt of the client) in a way that managed to be both excessively on the nose and remarkably hollow

for what it's worth, there are a couple of intriguing shots throughout and i loved the use of pampagueno to successfully establish a sense of character and place for the funeral scenes, as well as to highlight the disconnect between them and the cityfolk, but i'd never see this again

The Bread and Alley