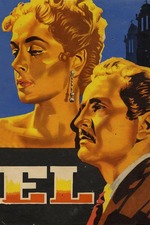 Underrated, major Buñuel. The subject: male hysteria, with Buñuel's scalpel even more merciless than usual. (He saw himself in the main character). The male Catholic virgin sculpts the ultimate female in his mind, a picture that'll destroy him. When he finally finds the object of his affections (his wife Gloria), he begins to covet, to orchestrate her corruption: this woman of flesh and blood who's no longer an idea must by necessity play the whore, the fraud. (She's far too great a character to give him that satisfaction). Most striking about his characterization is not so much his domineering and possessive nature, but his use of pity as a weapon. He weeps and degrades himself. For him manhood is an emotion--the feelings of inadequacy and defeat. And this ennobles (!) him in the eyes of others: his friends, his priest, even his wife whom he tortures physically and psychologically.

The movie begins with an eroticized Catholic ritual of the washing and kissing of feet that at once makes Francisco's folly appear fatalistic; and ends in a circular fashion with a nightmarish scene in a church where Christ himself seems to laugh... one of Buñuel's greatest scenes and that's saying something.

The scene in the bell tower precedes and is a direct inspiration for VERTIGO.