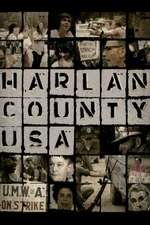 the barrel they have you over will and can be fucking smashed if you acknowledge that its there.

watching a bunch of the most mistreated laborious workers in US become collectively radicalized and unionized in real time is like being injected with adrenaline. i wanted to climb into the screen.
the hardships these people endure under a contracted tenure with rapidly congealing dark forces that literally prop them up to provide profit isnt a new tale, but hyper focusing on these towns/districts give you the full roadmap of exploitation you need.
being fuelled continually by newly penned folk songs being written about their situation as they descend into hell to work for satan.

i could talk about this film for a long time.
an essential and possibly went directly to the tip top of Documentaries That Should Be National Curriculum. a piece of working struggle art.