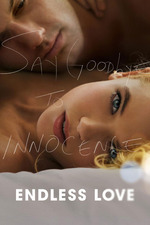 Review also posted on my blog

Well it’s abysmal but at least it’s laughably bad, so you might (I stress “might”) have some fun with it. Only loosely based, I’m reliably informed, on Scott Spencer’s novel of the same name / Franco Zeffirelli’s critically panned 1981 adaptation of that novel, Shana Feste’s film is either an ingenious exercise in genre spoof, caricature and parody, a rancorous assault on the sensibilities of those who believe in the style of vacuous love in which the characters indulge or a limp, lifeless look at teenage romance through the eyes of someone who has spent her life surrounded by Mills & Boon novels. Forgive me for leaping to conclusions but I think I’ll plump for the latter of those three options...

Now, I’ve seen people describe this as a great “woman’s film”, which is basically an insult to every woman I’ve ever met. The plot goes as thus: an insufferable cunt (Pettyfer) falls madly in love with a vapid bitch (Wilde), an event so offensive to the sensibilities of her pantomime villain esque Father (Greenwood, in a role that is so beneath him it’s not even funny...) that he attempts all but rewrite American criminal law in order to keep them apart. Meanwhile, her brainless, personality-vacuum of a Mother (Richardson) and her beautiful but simple brother (Wakefield) try to reason with the Father and also, in the process, start to fall for the charms - charms that were lost on me - of Pettyfer’s David. It’s vomitous stuff, as I’m sure you can imagine, though one has to give it at least some credit for being so unbearable that it’s sort of humorous, albeit in its own bile-inducing way.

The main problem with films like this is that they rely so heavily on wish-fulfilment and nauseating idealism that all of the attempts to indulge in a portrayal of “real love” come across as offensive and absurd. The characters are so false, the situation is so ludicrous and the performances are so pitiful that one simply starts to lose all faith in humanity. At no point in the film did I ever think “oh yeah, that’s believable”, though maybe that’s the point; after all, it is just romantic melodrama cranked up to eleven, with all the charm and subtlety of a rotting donkey. Yet for some people it seems to represent an ideal or an aspiration and that, in a nutshell, is all that’s wrong with the World.

Now, I’m not saying a nuclear holocaust would’ve been a good way to end the film, but I must admit to wishing death upon all of the characters from the word “go”. It’s not just that they don’t have a personality between them, it’s also that they’re written in such a cynical manner that certain members of the audience will no doubt find them likable. They’re not likable, they’re all odious; the girl is an idiot, the bloke is a prat, the Father is a fascist, the Mother is a fool and the brother is a whiney, self-obsessed cockend. If you happen to like these people then there’s a fine chance that I hate you just as much as, if not more than, I hate all of them.

Does Endless Love have a single redeeming quality? No, not really. It’s dull, offensive and shambolically plotted. The story jumps from one inconsequential scene of faux-romance to the next, with the occasional sequence shoehorned in to give Pettyfer the chance to wander about with no shirt on (though fair’s fair, I have few complaints with that aspect of the film) while Wilde gazes on with a look of constipated confusion on her face. It’s perhaps ironic that the film has “love” in the title because its sole effect on me was to make me hate the entire human race. I mean, I can forgive the shit script, I can forgive the laughable performances – heck, I can even forgive the awful sexism that runs through the entire affair – but must it be so insufferably boring?

Unlike Zeffirelli’s adaptation, which was a classic case of “so bad, it’s good”, Feste’s take on the novel is just plain bad. It gets a single star for making me laugh (though the laughs were, alas, unintentional) but for all intents and purposes this is one of the worst films I’ve ever seen. How Pettyfer keeps getting work I’m just not sure, but the real disappointment here is Greenwood... I mean, come on Bruce, what were you thinking!?

Also, on a final note, when I tried to type Endless Love into my phone, it autocorrected to Endless Lube which, let’s face it, would’ve been a far better film... though erm, don’t ask me why “lube” is more common than “love” in my dictionary...