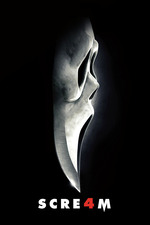 The first time I saw Scre4m, I really liked it. Looking back, I’m not sure what I was thinking but I’m pretty sure I can take a good guess. It was the film’s opening week and I had two friends down to stay with me. We were bored and, well, there was fuck all of any interest on at the cinema. So, preparing for the worst, we poured ourselves a hipflask full of Southern Comfort and made our way down to the nearest Odeon. For a film in its opening week, the screening was pretty dead; at most, there were seven or eight people in there. Nevertheless, we’d paid for our tickets so we had no choice but to sit through it. After the two hours were up and the hipflask was empty, the general consensus amongst my friends and I was that it was mindless but enjoyable and that, in comparison to Scream 3, it was really quite good.

Eighteen months later and it’s clear that, without the benefits of a good drink and a group of people to watch it with, Scre4m is a painfully mediocre film that missed its calling by about five years. Reuniting the three main cast members of the original trilogy – Sidney (Neve Campbell), Dewey (David Arquette) and Gale (Courtney Cox) – in the most contrived manner imaginable, the story is one that we’ve all seen before; man / woman / both in a ghostface mask goes round butchering attractive teenagers for some implausible reason whilst also attempting to bump off the three people who have fought their way, against the odds, through the first three films. In an attempt to keep the movie fresh – and because most of Sidney’s generation were brutally done away with over the course of the original trilogy – a new bunch of fresh, young high school students also find themselves embroiled in the new wave of murders and, wouldn’t you know it, end up working with Sidney, Gale and Dewey to unmask the killer(s) and survive the latest massacre.

I’m sure everyone is aware of just how influential and successful the original Scream movie was. Its success rested on the fact that it wasn’t just a slasher movie, it was a movie about slasher movies. Similarly, whilst less successful, Scream 2 was a movie about slasher sequels and how the rules of the genre change over the years. Scream 3 took it too far and was a waste of everybody’s time whilst Scre4m raises some good points but is just far too late to the game. The focus is on how the horror genre has changed over the past decade and how, arguably as a result of Scream, the rules no longer apply. No longer is the virgin safe, no longer does the killer have to be someone you know and no longer are the veterans guaranteed to survive. Advancements in technology drive the film, with many references to social networking and the idea that the killer now has to record his or her work for the consumption of the masses. Five years ago, ideas such as this would have been fresh and interesting. In 2011, not only have they already been done to death, but they feel more dated than they actually are.

Now, in Scre4m’s defence, there weren’t really many other avenues that the film could have gone down. The message of the film – that despite all the rule changes and unpredictable plot twists, the basics of the slasher genre always remain the same – is true but the handling of this message is poorly executed. Whilst I love a good in-joke, Scre4m goes overboard and tries too hard to be edgy when it’s actually a rather tame and safe addition to the series. There are no big shocks and a potentially brilliant conclusion is categorically ruined by the film’s final ten minutes, which undo all of the good work of the preceding twenty. The “meta” stuff is somewhat grating and quickly becomes tedious (in all honesty, it outstays its welcome before the titles even roll, with by series’ weakest opening act by far) and whilst the deaths are more gruesome and visceral than they once were, an over-reliance on gore tends to indicate that the film has little else going for it.

Not everything about this film is a complete write off though. As I said earlier, it’s an improvement on Scream 3 and on a purely selfish level, I’m glad that the film was made because it’s nice to see the three main characters again. Some of the jokes – particularly those relating to the real-life breakdown of Cox and Arquette’s marriage – are decent and whilst most of the new characters are pale imitations of those from the original film, Hayden Panettiere’s Kirby is a nice addition to the canon. Outside of this though, the film is predictable and uninspiring. If you’re looking for a film that challenges and exposes the tropes of the horror genre in the same way that Scream did, you’re looking in the wrong place here. Try The Cabin in the Woods instead. As much as I hate to say it, Wes Craven is no longer the visionary that he once was. It’s a shame but I think it’s probably best to bury this series now, before it becomes the next Friday the 13th…