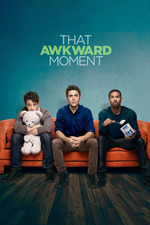 Review also posted on my blog

The poster for That Awkward Moment claims that it’s “the perfect date movie”. Now, I’m a lonely bastard with no-one to love so, unfortunately, I didn’t have a date to take with me. However, in hindsight, this was for the best; after all, if I’d taken a potential partner to see this drivel, I doubt they’d have ever wanted to speak to me again...

That Awkward Moment is a film about LADS being LADS and doing LAD things. They’re all offensive to women because women aren’t LADS, unlike this bunch of all-American LADS. Their lack of respect for their female counterparts is proportionate to how much LAD sex they’ve been having... though not with each other, because that’s gay and they’re not gay LADS, they’re LAD LADS. Yet though they might be LADS, they’re also emotional and complex; they’re what Del Boy (what a LAD) might call “modern men”. Or perhaps “plonkers”, but let’s go with “modern men” for now. So they’re modern men, also known as modern LADS, who don’t want to date women (because LADS don’t date) or have a serious relationship, they just want random sex with them now and then. Nowt wrong with that though eh LADS?

Pass me a sick bucket... or preferably a gun. For just over 90 minutes we are forced to waste our valuable time in the presence of these utter cuntflaps, none of whom have a brain cell or redeeming quality between them. It’s not that That Awkward Moment wants you to like the characters – to be honest, I’m not sure that it cares – but it tries so hard to make you “get” them that its failure to make them sympathetic is even more jarring than it might have been. I mean heck, I like Efron, Teller and Jordan just as much as the next guy. They’re all decent enough actors (yep, even Efron) who have shown a lot of skill in recent years. Their characters here however are hateful which, in turn, made me despise the people playing them. I mean come on guys... you’re all much better than this garbage.

Yet therein lays the film’s primary problem; the characters are, without exception, awful people. It doesn’t help that they’re all impossibly wealthy / good-looking, which means that the film spends most of its runtime indulging in a form of crass wish fulfilment, the result of which is to draw a line between the audience and the characters, but that’s just a minor part of a much larger problem. It’s like a male-centric version of Sex and the City, though perhaps not quite as tasteless as that colossal monstrosity. The characters have dull, passionless sex with dull, passionless women, before engaging in dull, passionless “banter” (because they’re LADS) about said sex, all with the expectation that the audience might give a single shiny shite about them or their dull, passionless exploits. Guess what guys? We don’t, so fuck off.

Of course, all of this might have been tolerable if the film was in any way funny. Fair enough, there are a few cheap laughs here or there but it has to work very hard for them, so the overall effect is little more than one of pity. I mean, you have to hand it to Gormican, he knows his audience well enough. With its sub-par, American Pie-esque gross-out humour, That Awkward Moment ticks all the boxes on the “what makes tossers laugh” checklist. We have jokes about sex shops, jokes about hookers, jokes about girls who, God forbid, happen to be great at X-Box games and jokes about being gay. Don’t get me wrong, I like jokes like this just as much as the next wanker but I expect them to at least be creative. Here, alas, they’re all just a bit tragic, not to mention excruciatingly dated.

I want to say that I’m disappointed but, well, I’m not; I expected trash and I got trash. That Awkward Moment is crass, humourless, sexist, aimless and ultimately boring. There are a few jokes that made me smile though none of them were remotely worth sitting through the rest of the film for, and though the performances weren’t awful per se, the script meant that the talents involved simply had nothing to work with. That, for me, is the film’s greatest crime; don’t cast someone like Michael B. Jordan if you’re not going to give him a decent script to sink his teeth into.

In conclusion; it gets half-a-star for being a film and 1 star for Zac Efron’s arse... and even that’s a bit too generous to be honest.