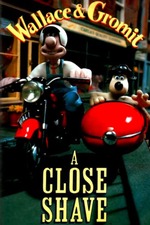 A Close Shave is the great follow-up to The Wrong Trousers. Nick Park shows off his brilliance once again here, starting the movie with a simple montage of Wallace's new inventions that have become popular in culture since and then introduces us to the mystery. The short introduced the world to Shaun the Sheep and his tribe that would get their own tv show 12 years later and also managed to reference every single Wallace & Gromit film (including the two futures ones).

The mystery in A Close Shave is surprisingly complicated in a good way and partially disturbing. It tells the story of a bunch of sheep who are kidnapped by an evil dog who's owner runs a wool shop (Wendolene). Wallace falls in love with Wendolene whilst Gromit encounters several strange events around him. Wallace does not have any luck with the women, and this was the first Wallace & Gromit film to have more than just one speaking character.

Nick Park's 1995 masterpiece is extremely sad and actually had me crying in the middle. In the end, I felt hopeful, but I am still shaking from the experience, to be honest. If I hadn't re-watched this today, I would have assumed from my memory that this is the best Wallace & Gromit short and whilst it is magnificent, it is not as good as The Wrong Trousers.

Nick Park still continued the phenomenon very well, including some very memorable and moving moments in this film. It surely deserved the oscar that year! Once again, Nick Park shows his abilities and dedication to creating art for every age group.

A Close Shave was followed by the feature-length film Curse of the Werewolf Rabbit and as of 2016, there has only been one additional Wallace & Gromit short.